After reading the book The Happiness of Pursuit by Happiness, Finding a Quest That Will Bring Purpose To Your Life by Chris Guillebeau, I declared my own quest. I have started a journey across the United States by reading a book by an author in every state of the union. You can read about my declaration here. Starting at the beginning of the alphabet, of course I began with Alabama with The Glass Harp by Truman Capote. I also read the essay by Mark Childress, Looking for Harper Lee.  Of course, my first choice was To Kill a Mockingbird, but I decided not to reread anything I’d read in the past 10 years! So, I chose a book by Harper Lee’s best friend. 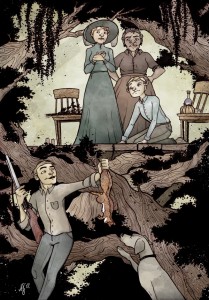 To start with, here are some interesting facts about our Western neighbor Alabama (i’m writing from Georgia).

The state song is Alabama

The mardi gras was introduced to the western world in Alabama

Huntsville is known as the rocket capital of the world

In 1902, the first open heart surgery in the western world was performed in Montgomery

The official insect is the Monarch butterfly

The pecan is the official state nut

At the Battle of Mobile Bay, Admiral Farragut issued the famous command “Damn the torpedoes, full steam ahead” August 5, 1864

The Birmingham Airport opened in 1931. At this time, a flight from Birmingham to Los Angeles took 19 hours

THE GRASS HARP was published in 1951. While Capote was born in New Orleans, he spent much of his formative years in Alabama, which was the inspiration for this novella. It tells the story of an Collin Fenwick, an orphan how is living with his elderly eccentric aunts, Verena and Dolly. He is intimidated by the businesswoman Verena, but he loves the gentle Dolly. There is also their friend Catherine, who lives in a small building on the property.

Dolly and Catherine have a small business making a dropsy cure from herbs. When Verena brings home a man from Chicago to mass produce the cure, Dolly becomes rebellious and moves into a tree house at the edge of town – taking with her Collin and Catherine. Several others in the town take up temporary residence with them, including Judge Charlie Cool and Riley Henderson.

This is a charming little book, almost with a fairy tale approach. It has been said it is a tale of misfits, what makes you you, and refusing to fit in.

The book was inspired by a tree house that was built in the 1930’s in Capote’s cousin Jenny’s yard. It had a tin roof, a spiral staircase and a sofa inside. Capote spent many hours here with his cousin and his best friend Nelle Harper Lee. His cousin also made a dropsy cure, taking the recipe to her grave.

Truman Capote was a master writer. The book definitely has a sense of the South. The Atlantic Monthly wrote it

“charms you into sharing the author’s feeling that there is a special poetry – a spontaneity and wonder and delight – in lives untarnished by conformity and common sense.”

This was Capote’s personal favorite! It is lyrical and beautifully written. Here are some quotes

“Dreams are the mind of the soul and the secret truth about us.”

“But, ah, the energy we spend hiding from one another, afraid as we are of being identified.”

“Of all things this was the saddest, that life goes on; if one leave one’s lover, life should stop for him, and if one disappears from the world, the world should stop too, and it never did. And that was the real reason for most people getting up in the morning; not because it would matter but because if wouldn’t.”

What is a grass harp? It is the sound of the wind blowing through a field of tall grass.

The essay Looking for Harper Lee by Mark Childress was worth the time it took to read about ten pages. I believe it was originally published in Southern Living magazine.  Mark Childress has produced such modern day southern classics as Crazy in Alabama and Tender. And, he actually grew up on Monroeville, Alabama, the home of Harper Lee. He explores the mystery of Harper Lee, her importance in literature – and his quest of meeting her (he had a quest too!).  As he says:

“She wrote a book that was better than anybody else’s book, and never saw the need to publish another. I think she wanted to stay inside.”

By the way, he did meet her after the essay was published, happening upon her and her sister eating  at The Catfish House in Monroeville.

“They were sweet to me, every bit as sweet as the tea at the Catfish House. I was glad I’d waited.”