To say life has changed lately is an understatement. My reading habits have changed, I have started more books than I have finished lately. But, here are the ones I actually finished over the past two months.

Alice’s Adventures in Wonderland With Artwork by Yayoi Kusama   I purchased this at the Kusama exhibition in Atlanta, as I love this book and I have probably read if at least five times. But, I have to admit, I missed the old illustrations by John Tenniel. It’s time to pick up Through The Looking Glass! 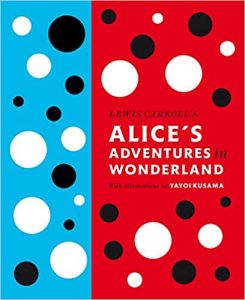 The Mark on the Door and The Secret of Skull Mountain both by Franklin W. Dixon – I had never read a Hardy’s Boys book, but I found these two on the bookshelf (they belong to my husband). I didn’t know anything about the Hardy Boys’ – I didn’t even know their father was a world class detective. But, these books were a nice diversion while “staying at home”. 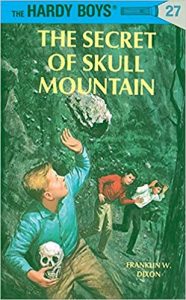 The Secret of Skull Mountain

Peachtree Road by Anne Rivers Siddons  – I read this book when it originally came out (1988) and living in Miami. I realized how much I missed Atlanta, and I was back before the end of the year! Even though it starts off a little slow, it picks up. Of course, it is fun to read a book knowing exactly where they are. Plus – you can’t put a book down that begins with this: “The South killed Lucy Bonduran Chastain Venable on the day she was born. It just took her until now to die…..It’s what we do best, kill our women. Or maim them. Or make mother’s of them, which may be the worst of all.”  The two main characters, Shep (the narrator) and Lucy are well fleshed out. I was glad I saved the book and could revisit it. On an aside, when the “stay at home” began, I started walking. I no longer live in Buckhead, but it is a short drive from my home in Decatur. My plan was to go into Buckhead, park my car and take a walk on the streets that are in the book. But, then the demonstrations started and I decided to stay close to home, at least for now!

Hiking Atlanta’s Hidden Forests – Inside and Out – by Jonah  McDonald – I’ve had this book for YEARS and have referred to it over and over again. But with my new interest in walking, I sat down and read through the entire book and have started visiting new places to explore. My favorite? The Doll’s Head Trail – 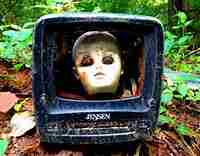 Image from the Doll’s Head Trail

When the land was purchased to create a nature preserve, volunteers and other workers noticed the many dolls and other interesting finds in the dump and began placing them in thoughtful ways along the trail they were foraging, that would eventually be the Dolls’ Head Trail.

The Fifth Assassin by Brad Meltzer – At the end of May, I saw a story on CBS Sunday Morning about the explosion of audio books. Apparently, there is a “star” in this world, Scott Brick. Meltzer was interviewed and he said when he writes his books, he hears Scott Brick reading them. (here is the link to the story) I’ve read his books before and I found the story interesting. Weirdly, on a walk later in the week, I came across a Little Free Library – and there was this book, which was discussed in the story! Serendipity in action.

The main character is trying to find the identity of an assassin before he kills the President. And, of course, the President is corrupt. The real history of presidential assassinations is blended into the mystery. The timeline moves about – and it is alot to keep up with. I would say it is an “okay” read, not his best, but it still moves forward.

A Man in Full by Tom Wolfe – another reread, in fact I received this book after attending a luncheon with Tom Wolfe. (I am a long time fan. In fact, I went to see him four times over the years beginning in 1975.)  At 704 pages, it is a commitment. There are three different stories. First is  Charles Croker, once at football star at Georgia Tech, now a middle-aged Atlanta titan with an outsize ego, who also has a 29,000 acres quail shooting plantation in South Georgia, a young wife, empty commercial real estate and alot of debt. Then you have Conrad Hensley, who is laid off from his job for Croker Global foods in California.  There is Fareek Fanon – a Georgia Tech football star from the slums, accused of date-raping the daughter of a wealthy member of the top echelon of Atlanta’s white society, and the lawyer, Robert White II, who represents him. The book is thought provoking and at times hilarious. It would make a good HBO series!

Sullivan Island by Dorothy Benton Frank – because this is set in the “low-country” of South Carolina, I enjoyed reading it. Great beach read – but it won’t stay  with you for long.

Severe Clear by Stuart Woods – This is one of his “Stone Barrington” novels – a character that has appeared in 20 novels. This one deals with the opening of a very upscale hotel in Bel-Air, on property that belonged to his late wife. Of course, terrorists are involved and havoc ensues!

The Bible Salesman by Clyde Edgerton  – Henry Dampier loved selling Bibles, saving souls and getting to know his customers who bought Bibles from him. One day, Preston Clearwater invites Henry to join him working for the FBI. Henry is clueless that he is actually transporting stolen cars. Henry begins to read the Bible he has been selling for years and falling in love with the girl at the produce stand. It takes place in the early 50’s, and goes back to Henry’s childhoods in the 30’s. Edgerton understands the South – and while this isn’t his best book, it was still a pleasure to read!

I see an inadvertent trend here. All of the books except for Alice’s Adventures in Wonderland, The Hardy’s Boys books and the Brad Meltzer book were written by Southerners.

While the library remains closed, many of these books came from Little Free Libraries (or which I have one!). If you prefer reading an actual book, refer to their map and see if there are a few around you!

Moving forward, I’m going to revisit some of the books I started and finish them. It is very unusual for me to not finish books – and there was nothing wrong with the books, I just couldn’t concentrate!

What are you reading? Has your reading changed during the “Stay at home” time we are living in?