Let’s take a trip through Atlanta with composer Jennifer Higdon. This is my eighth installment in my Women in Art Series.

This post is somewhat serendipitous. One of my readers suggested I include women in other genres of art, i.e. composers, authors, etc. I took it as a challenge. Coming from a musical family (my grandfather had a music store and was a piano tuner, my father rebuilt pianos), I realized I wasn’t familiar with any female composers to speak of. Wouldn’t you know – within 24 hours I tuned to NPR and heard a story about Jennifer Higdon, who has Atlanta roots. 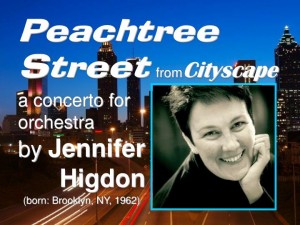 Born in Brooklyn, she spent her first 10 years in Atlanta, Georgia. Teaching herself to play flute at age 15, she didn’t start formal training until age 18 and began studying composition at the ripe old age 21. She studied at Bowling Green State University and majored in flute performance. While there she met Robert Spano, the music director for the Atlanta Symphony Orchestra, who was teaching conducting there at the time and has since become a champion of her compositions.

Jennifer is  a force in contemporary classical music and makes her living primarily from commissions. The Washington Post called her

“a savvy, sensitive composer with a keen ear, an innate sense of form and a generous dash of pure esprit.”

She received the Pulitizer Price in Music for her Violin Concerto, as well as awards from The Guggenheim Foundation, The American Academy of Arts and Letters (two awards), The Pew Fellowship in the Arts, the National Endowment of the Arts and ASCAP. She has been a featured composer as many festivals, including Tanglewood.

Her work is performed several hundred times a year, and her orchestral work blue cathedral has been performed over 500 times since it premiered in 2000 – making it probably  the most popular orchestral piece performed today.

Her work City Scape is based on her memories of Atlanta melded with her perceptions of Atlanta today (and it is dedicated to Robert Spano). Here are her words from the album notes:

“The first movement, “SkyLine” is the profile of Downtown, Midtown, and the Lenox Area. Over the past four decades I’ve watched the skyline change and grow, rising up distinctly into its own identifiable shape, projecting an image of boldness, strength and growth. Every city’s skyline is a fingerprint that the rest of the world recognizes at a distance; Atlanta has developed a powerful, distintively metropolitan image, recognizable around the world.”

Today, Jennifer teaches composition at the Curtis Institute of Music in Philadelphia where she currently resides. She is also working on her first opera based on Charles Frazier’s book Cold Mountain

Take a listen, the first is Blue Cathedral, the 2nd is an excerpt of City Scape


2 thoughts on “JIVING WITH JENNIFER DOWN PEACHTREE”