21 WEEKS TO YOUR MOST CREATIVE SELF

You read that right!  Give yourself permissions to fail!  This is the 7th installment in my series 21 WEEKS TO YOUR MOST CREATIVE SELF.

People are not born with a fear of failure. Think back to the time when you were a kid. Wouldn’t you try anything?  Didn’t you wonder about how things worked?

It has been said that failure is a requirement for creativity. Being creative means trying things by trial and error, and if it doesn’t work, you just keep trying and you keep going.

Being wrong can bring about unexpected discoveries. In the art studio – these are often referred to as “happy accidents”.  Relish the uncertainty of not knowing how things are going to turn out. Embrace wondering what will happen.

“Don’t try to create and analyze at the same time.” John Cage.

In fact, I paint in layers. One evening while cooking out, I thought I’d lay a canvas on the grill for a few seconds.  This moment propelled my art in a new direction as I began exploring the effect fire can have on paint.  See below – 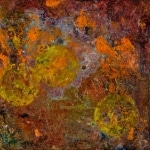 So, experiment with things you have never considered using before!  Embrace the things that don’t work, use what you learned and move on to more experimentation.

using both fire and gunpowder 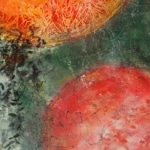 Below are successful people that failed at first:

EINSTEIN: did not speak until he was four and could not read until he was seven. He was the only person in his graduating class that was unable to get a teaching position.

FRED ASTAIRE:  After his screen test, the casting director wrote “Can’t act, Can’t Sing. Slightly Bald, Not handsome. Can dance a little.”  He kept that note with him his entire life to remind him to never quit trying.

WALT DISNEY: Was fired by a newspaper editor who said “he lacked imagination and no good ideas.” He also started businesses that ended in bankruptcy before he found success.

THOMAS EDISON: Was fired from his first two job because he wasn’t considered productive. He also made 1,000 unsuccessful attempts at inventing the light bulb.

ABRAHAM LINCOLN: went to war a captain and returned a private. He was also defeated over 20 times before he won a public office.

JERRY SEINFELD: froze the first time he was on stage and was booed off the stage.

VINCENT VAN GOGH: sold only one painting in his lifetime, and that was to a friend.

The list goes on and on! So, don’t let that fear of failure paralyze you!

What are some of your successes that started out as mistakes?