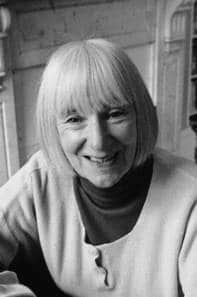 Eva Ibbotson (born Maria Charlotte Michelle Wiesner) published her first English language novel at age 50.  Known for her children’s books, she was an Austrian-born British novelist. This is my 9th installment in the Women in Art Series.

Born in Vienna in 1925, her father was a doctor who is credited with pioneering human fertility treatment (and probably used his own sperm). Her mother was a novelist and playwright who worked with Bertolt Brecht. When her parents separated in 1928, her father became a professor in Edinburgh while her mother hightailed it to Berlin. For Eva, it was a

“very cosmopolitan, sophisticated and quite interesting, but also very unhappy childhood, always on some train and wishing to have a home.”

Her mother’s writing career stopped when Hitler banned her work – and relocated her and Eva to London in 1934, avoiding the worst of the Nazi’s.

Eva initially thought she’d like to be a physiologist like her father, but she couldn’t commit to spending a life doing experiments on animals. While studying at Cambridge, she met her future husband, Alan Ibbotson, a university professor and entomologist.  They had three sons and a daughter and that was the end of her scientific career. She was briefly a teacher and began her writing career in the 1960’s.

Her first English language book was The Great Ghost Rescue published in 1975. Her books are known to be imaginative and often humorous. She wrote about magical places,  even though she disliked the supernatural –  she wanted to dispel that fear in her readers.  She said she disliked “financial greed and a lust for power”, which is another theme in her books.

Interestingly, one of her books, The Secret of Platform 13 has been compared to the Harry Potter books – both platforms are located at King’s Cross Station!  But, as far as plagarism or copying goes, Ibbotson stated of J.K. Rowling

“I would like to shake her by the hand. I think we all borrow from each others as writers.”

To properly research this article, I chose to read the book One Dog and his Boy.  Interestingly, it was her last completed book, finally a good dog book where all the animals live (but not the author, sadly). 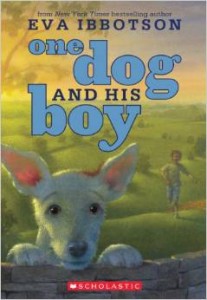 This is the story of a boy and a dog that were meant to be together.  His materialistic wealthy parents feel they give him everything he could possibly want or need.  But, what he really wants is a dog. So, they “rent” a dog for the weekend and fool the boy. When the dog is returned to the rental agency, the boy, of course, rescues him.  This turns into an odyssey involving another girl and four additional dogs and a trip to the circus.

Would I read more of her books? You betcha!  Here are some quotes from her books:

“slowly, Anna put up a hand to his muzzle and began to scratch that spot behind the ear where large dogs keep their souls.” A Countess Below the Stairs

“Loneliness has taught Harris that there was always someone who understood – it was just so often that they were dead, or in a book” A Company of Swans

“I want to live like music sounds.” The Morning Gift

“You cannot stop the birds of sorrow from flying over your head, but you can stop them nesting in your hair.” A Countess Below the Stairs

“…adventures are good for people even when they are very young. Adventures can get into a person’s blood even if he doesn’t remember having them.” The Secret of Platform 13

I think the quotes say is all! I am thankful my research on Women in Art introduced me to Eva Ibbotson!

4 thoughts on “IT WAS NEVER TOO LATE FOR EVA IBBOTSON”