Tracey Emin is never boring,  considered shocking by some, This is the fifth installment in the Women in Art Wednesday series.

she’s smiling, not the usual sneer

Born in 1963, she was part of the hip group called  YBA’s (Young British Artists).

She studied fashion at what is now called the University for the Creative Arts. Later shemoved to London and received an MA in painting from the Royal College of Art. Working in  shop with artist Sarah Lucas, she made extra money writing letters asking for $20 pounds to invest in her life as an artist (don’t you love that?).

In November 1993 she had her first solo show at the White Cube Gallery in London – calling it My Major Restrospective.

“I thought it would be my one and only exhibition, so I decided to call it My Major Retrospective.”

The show consisted of personal photographs and photos of early paintings she had destroyed, as well as other personal momentos. (including a pack of cigarettes a favorite uncle was holding when he was decapitated in a car wreck – lovely huh?).

In 1997, her work Everyone I Have Ever Slept With created quite a sensation consisting of  a tent with 102 names appliqued on the inside (this was destroyed in the famous Momart fire).  Of course, the public thought it was 102 people she’d had sex with, but it was more inclusive than that.

“Some I’d had a shag with in bed or against a wall some I had just slept with, like my grandma. I used to lay in her bed and hold her hand. We used to listen to the radio together and nod off to sleep. You don’t do that with someone you don’t love and don’t care about.” 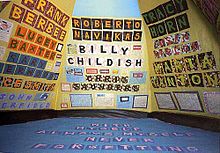 She gained more exposure later the same year when she swore a few times and stormed off a live television program, apparently drunk.  Are you starting to get the picture?

In 1999, she was nominated for the Turner Prize and showed My Bed, which  was ownher unmade bed  complete with yellow stains, condoms, empty cigarette packs, and blood stained underwear. She had stayed in the bed for several days feeling low possibly after a breakup. Here is an article from the Guairdian about this piece returning to The Tate (it is featured on their landing page). 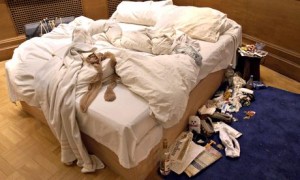 This isn’t even considered the most famous bed in art history. According to The Guardian, Titian’s  Venus of Urbino is.

2007 – represented Britain in the Venice Biennale

from the Venice Bienalle

from the Venice Bienalle

She has lectured at the Victoria and Albert Museum in London, the European Graduate School in Switzerland and the Tate Britain – usually about the link between creativity and autobiography.

2011 – appointed Professor of Drawing at the Royal Academy – one of the first two female professors since it was founded in 1768!

2013 – became a Commander of the Order of the British Empire -that makes her a Dame!

David Bowie (who is a friend) once described her as: (I am a BIG Bowie fan!)

“William Blake as a woman, written by Mike Leigh”

When she was in a relationship with artist/poet Billy Childish, he started the Stuckism Movement, he said to her?

“Your paints are stuck, you are stuck – Stuck! Stuck!”

To which she has replied:

“I don’t like it at all….I don’t find it funny, I find it a bit sick and I find it very cruel and I just wish people would get on with their lives and let me get on with mine.”

“Being an artist isn’t just about making nice things, or people patting you on the back; it’s a kind of communication, a message.”

I googled alot while researching this..  I found you can buy t-shirts and dishes on her website. I also learned there is much more to Tracey Emin than an unmade bed!

Map she did for London’s transit system

from the London Olympics