I am currently reading a book from an author from each state  (read about my quest here)- and the most recent state I visit is Florida. Interestingly, many writers you associate with Florida are not actually from there. Because I lived in Miami for three years (and one month and 12 days, but who’s counting?), I wanted to read something written by an actual Floridian. I read two books, a children’s book, and a book that is a collection of op-ed columns from the Miami Herald. 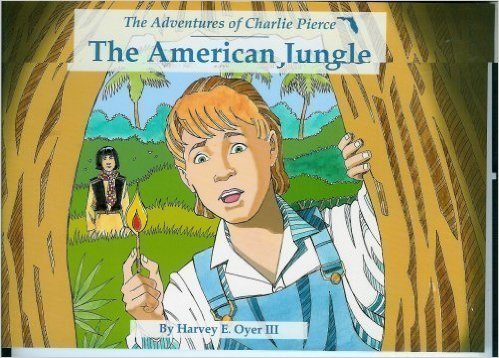 THE AMERICAN JUNGLE, The Adventures of Charlie Pierce by Harvey E. Oyer III: This is the first book in a trilogy based on Charlie Pierce, written by his great grand nephew. Luckily for us, Charlie Pierce kept extensive diaries! His family were pioneer settlers in South Florida arriving in 1872, one of the first non-Native Americans to settle there. In fact, his sister Lillie was the first while child born between Jupiter and Miami (hard to believe since there are over 6 million people there now).  Not only do they survive a hurricane living in primitive conditions, but they planted salvaged coconuts from a Spanish shipwreck in 1878 resulting in the coconut palms that provided Palm Beach it’s name. If you are interested in the early history of South Florida, pick up this book! 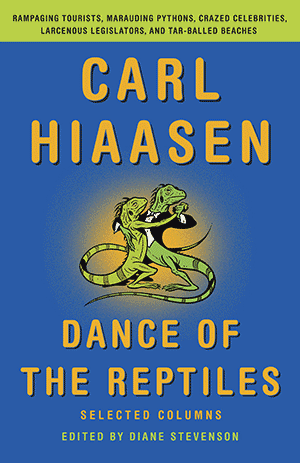 DANCE OF THE REPITILES: Rampaging Tourists, Marauding Pythons, Larcenous Legislators, Crazed Celebrities and Tar Balled Beaches by Carl Hiaasen:  I have long been a fan of Carl Hiaasen and thought I’d read all his books. But I must admit I was delighted when I found this book containing almost 400 pages of his op-ed columns from the Miami Herald! Carl is a native Floridian (born in Plantation) and has been working for the Miami Herald since 1976, having his own column since 1985. If you have read Carl Hiaasen before and wondered where he comes up with the crazy stories and eccentric characters, look no further, they come from real life, as you can see in these pages! Plus, how could I ignore any book with such a great title?

You can see him being interviewed about it on 60 Minutes:


Yes, according to the world of Carl, truth is stranger in many cases than fiction. The title refers to not only actual reptiles (as in pythons and alligators), but also refers to corrupt lobbyists, politicians, developers and of course the tourists! The essays are backed up by actual facts.

Some of the topics he tackles are:

He also writes about national news, from the sub-prime mortgage meltdown, Vice-President Cheney, The NRA, The Iraq War, and Florida’s stand your ground law.

He also loves Florida. Liberals will love this book, conservatives, not so much.

SOME FACTS ABOUT FLORIDA

It is the third most populous state.

St. Augustine is the oldest European settlement in North America.

Florida has the longest coastline in the contiguous US.

It is the flattest state in the US (mean elevation is 100 feet).

It is the only state with an “embassy” in Washington (Florida House).

There are two rivers with the same name – Withlacoochee – and they have nothing in common but the name.

It is the largest producer of citrus fruits in the US, 2nd in the world.

Gatorade was named for the University of Florida’s Gator.

Key West has the highest average temperature of any city in the US.

Miami is the only  metropolitan city in the US that borders on two national parks, The Everglades to the west and Biscayne Naitonal Park to the east.

Florida has more golf courses than any other state.

The Everglades is the only place in the world where crocodiles and alligators co-exist.

You are never more than 60 miles from a beach in Florida.

Clearwater has more lightening strikes per capita in the US.

It is illegal for unmarried women to parachute on Sundays.

Key West has more bars per capita than any other place in the US.

There are more crazy facts about Florida, but with all the eccentricities, I still love it!

Next up, I’m traveling to Georgia. Oh wait, I live here!

You can see past posts regarding my quest below: