For the past two months, I have repeated a couple of authors more than once, learned about two different Buddha characters, read a couple of children’s classics, and had a healthy dose of Southern literature. 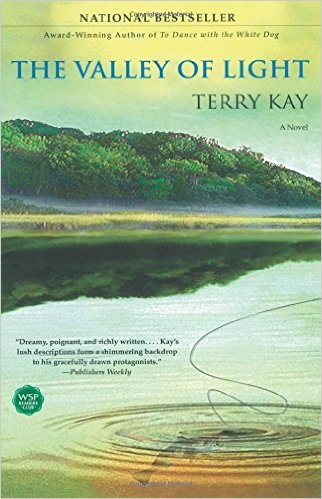 THE VALLEY OF LIGHT: A NOVEL: by Terry Kay – This was a book club selection and I loved being reintroduced to Terry Kay, who lives about 60 miles down the road in Athens, Ga. This is a beautifully written, lyrical story about Noah who comes to a small town in North Carolina that is set in the Valley of Light.  He has a magical ability when it comes to fishing. Because Terry Kay is from Georgia, I will be writing more about this when I write about my reading quest (reading a book by an author from each state) as this is one of four (or five) books I read for Georgia. I was also lucky enough to go to a small discussion led by Terry Kay also.

THE RUNAWAY by Terry Kay  – Tom and Son Jesus are born at the same time on the same day – one black and one white.  At 12 years old, they are best friends. Tom is a reader and decides to run away in a Huck Finn inspired episode. Along the way the two boys discover a human bone that ends up being from Son Jesus’ father who was murdered a few years earlier.  Set in Georgia in the 1940’s, there is a sheriff that is more interested in justice than traditional racist thinking. Again, I will share thoughts about this book in my Georgia blog, and some thoughts from Terry Kay himself.  This leads me to the next book:

THE BOOK OF MARIE by Terry Kay – This is Terry Kay’s favorite book, so after I heard him say it, I had to read it. There is an interesting history about this book and the previously mentioned The Runaway.  Terry Kay had written a book that followed the two boys from The Runaway through childhood, through young life where they are separated, into older life, framed by the Civil Rights Movement. But, the publisher thought the first part of the book was what needed to be published – of course, they know better. Terry Kay kept playing around with the remainder of the original story and ended up with this. It is NOT a sequel to The Runaway.  You can hear him speak about this book below.


ANNE OF GREEN GABLES; ANNE OF THE ISLAND; ANNE’S HOUSE OF DREAMS by Lucy Maud Montgomery – Believe it or not, this is one of those classic books series I have never read (I found it at mom’s house). I thoroughly enjoyed all three.  It covers the adventures of Anne Shirley who arrives at the home of Matthew and Marilla Cuthbert, an older brother and sister, who were going to adopt a boy to help with the farm. But Anne is sent instead. Of course,  they keep her instead of sending her back. Why would they send her back after spending time with her? She may be talkative, but she has a big and good heart, a positive attitude, a curious nature, and she is always getting into mishaps of her own making (like dying her red hair and ending up with green hair).

THE LITTLE PRINCE by Antoine de Saint-Exupery – no, I have never read this before!  Published in 1943, a year before the author’s plane vanished over the Mediterranean.  The story of a pilot marooned in the desert that meets a tiny prince from a asteroid so small he sees the sunset 44 times a day. There are a lot of lessons in this little treasure, much to think about.  Instead of hashing all this out, I thought I’d share some of the best known quotes:

“All grown-ups were once children…but only a few of them remember it.”

“And now here is my secret, a very simple secret: It is only with the heart can one see rightly; what is essential is invisible to the eye.”

The most beautiful things in the world cannot be seen or touched, they are felt with the heart.”

“I must endure the presence of a few caterpillars if I wish to become acquainted with the butterflied.”

NECESSARY LIES by Diane Chamberlain – This was read for a book club, and boy did it have a good discussion. It takes place in 1960 in North Carolina. Ivy Hart (age 15) lives with her family as a tenant family on a tobacco farm. She is basically the caretaker for her grandmother, her older sister and nephew. Jane Forrester, the newest social worker, must confront the decision to sterilize Ivy without her knowledge. The state contends if you are poor, ill, or deemed “unfit”, you should not have children. This is known as Eugenics, and the Nazi’s did not start this, in fact it was legal in North Carolina into the 1970’s! It was an eye-opener. I couldn’t put it down and it drove me to research the world of Eugenics.

THE GOOD GOOD PIG: The Extraordinary Life of Christopher Hogwood by Sy Montgomery – I fell in love with this pig, as the runt of the litter he was small enough to fit in a shoebox, He ended up reaching almost 800 pounds! The author is a vegetarian naturalist, her husband is Jewish – so Christopher was never in danger to be slaughtered for food. Set in a small town in New Hampshire. He escapes for jaunts around the town to the point the policeman keeps treats in his car for him to lure him home. Restaurants save leftovers to bring to him weekly and the little girls next door gave him a weekly “spa” day. Even on election day, there were always a few write-in votes for Christopher Hogwood. You follow him through is life of over 13 years (no one knew knew what his life expectancy was as most pigs are slaughtered before the age of one year!) to his trip to Hog Heaven. He was featured on NPR and USA Today. BTW, Christopher Hogwood was named after a conductor in England of the same name (who dedicated a performance to the pig upon his death). He was the first Buddha like character I encountered in the past two months.


THE SOUL OF AN OCTOPUS: A Surprising Exploration into the Wonder of Consciousness by Sy Montgomery  – Yes, this is the same author that wrote The Good Good Pig.  I have to admit, an invertebrate stole my heart!  The octopus Octavia is so alive and has such a personality. Yes, she does recognize her humans and loves to interact with them. As Montgomery watches her lay her eggs -she calls them like “tiny seed pearls on a black string”. I couldn’t  help but be mesmerized by these creatures. Here you can hear her talk about this book.


LUNCH WITH BUDDHA by Roland Merullo – Here is the second Buddha character I met in two months. This is the sequel to Breakfast with Buddha. Otto Ringling is facing an emotional crisis, and once again his sister Cecilia arranges (as she did in the previous book) for him to travel with her husband, Volya Rinpoche, through Washington, Idaho, Montana and finally to the family home in North Dakota. They talk about life and death, marijuana, sexuality, Native Americans while visiting such landmarks at Yellowstone Park.  The book isn’t as playful as Breakfast with Buddha,  there is an underlying theme of grief, but there are profound lessons to be learned. I have Dinner with Buddha to enjoy next!

ONE PLUS ONE by Jojo Moyes – I have never read Jojo Moyes and felt it was time to check her out. This is the story of one single mom, a math prodigy daughter, a Goth stepson, and a wealthy stranger.  Together they take a crazy trip across the country to get to the Math Olympiad in Scotland for the daughter. The story is pretty unbelievable, but you want to believe it and you root for them all. Jess and the stranger, Ed, have made some bad choices, but they are good people trying to get ahead in the world. I’ll read more of her books! 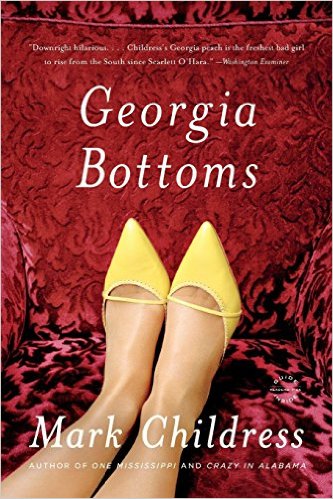 GEORGIA BOTTOMS by Mark Childress – First of all, it is important to note that Mark Childress is from Monroeville, Alabama, the home of both Harper Lee and Truman Capote. The story takes place in Six Points, Alabama, where no one realizes Georgia’s family money is gone. Her mother has dementia, her brother is a drunk. But Georgia has all these balls in the air as she has six lovers, one for each day of the week (she takes Mondays off). The men don’t know about each other and they all leave her a monetary gift. But when the Baptist preacher seems on the verge of spilling the beans, Georgia takes matters into her own hands. The book is funny, the characters are definitely Southern, but it isn’t his best book (TENDER or CRAZY IN ALABAMA are better). But, still it is a good quick read. 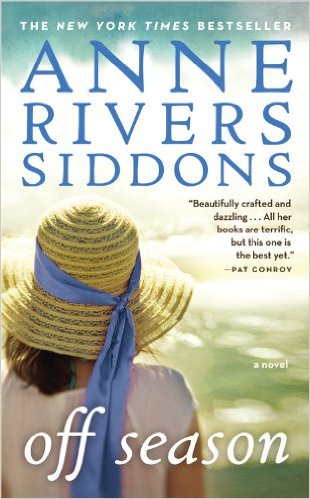 OFF SEASON by Anne Rivers Siddons – The book revolves around Lilly Constable McCall who is married to a successful architect, and  herself a successful sculptor. But her husbands death sends her on a journey to the Maine cottage where Cam (her husband) died, She spent her summers throughout her life there too.  She seems to carry on conversations with a spirit that seems to inhabit the site that has brought so much joy, as well as tragedy in her life. She revisits her 11-year old life and the boy Jon Lowell who is her first love. I’ve read many books by this author that I loved (especially PEACHTREE ROAD), but this one seemed to skim the surface – it is good but not great! And I felt the ending was a cop-out.  But, I plan on re-reading PEACHTREE ROAD.

Do you have any suggestions????

3 thoughts on “APRIL AND MAY BOOKS”