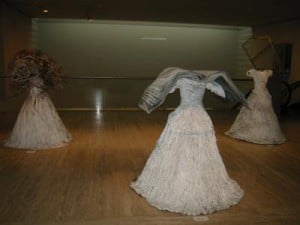 Anselm Keifer is one of my favorite living artists.  Born in Germany in 1945, he studied with Joseph Beuys during the 1970s.  Frequently using things such as straw, ash, clay, lead, cement and shellac in his works, he creates textures that I love!   He frequently uses themes that revolve around German history and the horrors of the holocaust. 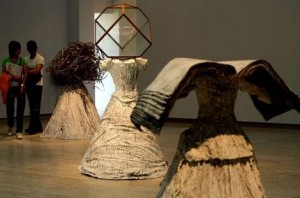 The above photograph is from his series Women of Antiquity.  This addresses the unfair treatment of women in many mythologies, particularly strong women who were often persecuted and usually murdered. The figure in the forefrunt is the poet Myrtis, represented by replacing her head with a lead book, possibly symbolizing the weight of knowledge.  Next is Hypatia, a philosopher and mathematician, represented by a glass geometric shape, an homage to Albrecht Durer’s famous engraving of a Melancholia as a damaged cube.  The last figure is Candidia, a Roman witch known for weaving vipers into her hair.  Keifer has replaced the vipers with rusted razor wire.  Don’t you just love the symbolizm?

The sculptures are made of bronze giving them a sense of strength.  But by making them look so fragile, they also manage to seem vulnerable.

I included the painting below because – well because I just love his work! 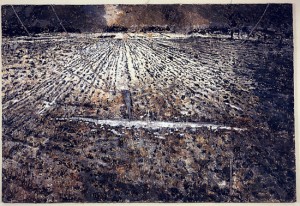