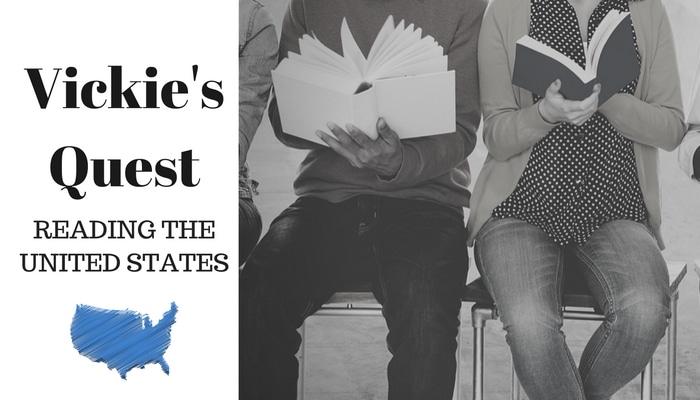 No, my quest (at this time) is not to visit the entire United States, but it is to read the United States. So join me  in my journey across the nation as I read a book by an author from each state. Today I am visiting Hawaii – and the book I chose was The Descendants by Kaui Hart Hemmings. When I saw the movie, I knew I had to read the book! 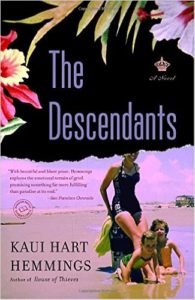 This was originally published as a short story (The Minor Wars” from the book House of Thieves).  The main character is Matt King, a descendant of Hawaiian Royalty and American missionaries, sounds like aperfect life. But, his luck has changed. His wife, Joanie, is in an irreversible coma, following a boat-racing accident and will soon be taken off life support.

But, before this happens, he wants everybody to have the chance to say goodbye to her, and in contacting everyone he finds she was having an affair with a real-estate broker. Is this the person that the apparent adrenaline junkie Joanie ever truly loved? To make matters worse, his cousins are pressuring him to sell the valuable landholdings for development, which to him would be the last link to their past of their native Hawaiian ancestry.

All of this compels Matt to travel, and reconnect, with his two daughters – smart mouthed 10-year old Scottie and 17-year old Alex, a former model and also fresh from rehab. They go from Oahu to Kauai to find Brian Speer, the real estate broker Joanie was having an affair with.

Sounds pretty terrible – right? However, this DEBUT gentle novel is also funny. You can read it in a day. Frankly, I was sorry for it to end. I actually downloaded the book of short stories this originally came from. One interesting fact in the book, the daughter Scotty is sporting a George Clooney t-shirt – remember, he played Matt in the movie.

Here are some interesting facts about Hawaii:

The word Hawaii is from the Polynesian word hawaiki which means “face of the god” or homeland.

Because Barack Obama was born in Hawaii, he is the only president from outside the continental United States (oh yea, he was born in Kenya).

Hawaii is the only state to have increasing land area. Why? volcanic eruptions.

No other state grows coffee or has tropical rainforests.

The astronauts trained for the moon voyages by walking on Mauna Loa’s lava fields.

Hawaii is the only state to honor a monarch, celebrating King Kamahameha Day since 1872.

The hula was originally a form of worship performed by men.

Surfing, or as it is known in Hawaiian, heenalu, was invented thousands of years ago by the Polynesians, who first settled Hawaii.

My next stop is Idaho!

Is there anybody else doing any kind of quest?

One thought on “MY READING QUEST TAKES ME TO HAWAII”