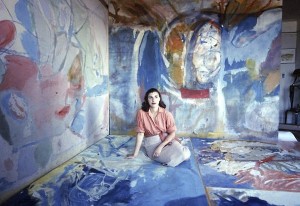 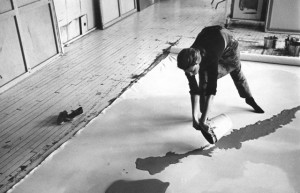 “The only rule is that there are no rules. Anything is possible…It’s all about risks, deliberate risks.”

This is how Helen Frankenthaler refers to the art she practiced for over 60 years, making history before she was 30 years old. This is my sixth installment of my Weekly Women in Art series.

How did she make history so young? By taking the technique accredited to Jackson Pollock  of pouring paint directly onto the canvas,  she adapted it to her own needs. Pollack used enamel paint that sat on top of the canvas. Frankenthaler used oil that was thinned with turpentine which soaked into the canvas, seemingly staining the canvas.

“It was all there. I wanted to live in this land. I had to live there, and master the language.”

That is what she said after seeing the Pollock show at the Betty Parsons Gallery in 1950 or 1951.

She painted this before her 24th birthday. Measuring 9 feet wide by 7 feet high Mountains and Sea directly affected both Kenneth Nolan and Morris Louis. Louis later said it was a

“Bridge betwen Pollack and what was possible.”

Helen was grew up on the New York’s Upper East Side. Her father was a New York State Supreme Judge, her mother a German emigre’.  It is safe to say she had a privileged background!

After graduating from Bennington College, she inherited money from her father (who had died in 1940) and was able to get a New York apartment AND have a separate studio! And, she began painting full-time.

When she organized an exhibition in 1950 at Bennington College she met Clement Greenberg, considered one of the foremost art critics of the day, and began a five year relationship with him. Through him she met Pollock, David Smith, Willem and Elaine de Kooning, Franz Kline, Lee Krasner and other members of the New York artworld at the time.

When she separated from Greenberg, she met Robert Motherwell and married him in 1958. He  was also from a well-to-do family, and they were suddenly the “golden couple” of the artworld. They spent months honeymooning in Spain and France.

When they returned, they left the downtown art scene and moved uptown and began entertaining. British sculptor Anthony Caro recalled a dinner party on his first trip to New York which was attended by over 100 people. He sat between David Smith and Hedy Lamarr.

Helen loved entertaining, and she loved to dance. She attended a function at the White House in 1985 honoring the Prince and Princess of Wales. After dancing with a partner that twirled her around, she said:

“I’ve waited a lifetime for a dance like this. He was Great!!!”

When she returned to New York, she showed her assistant his card – “John Travolta”.

The awards she received are numerous. among them:

Her exhibitions are just as impressive

“Being the person I was and am, exposed to the things I have been exposed to, I could only make my painting with the methods – and with the wrist i have.”

“I have always been concerned with painting that simultaneously insists on a flat surface and then denies it.”

“My pictures are full of climates, abstract climates. They’re not nature per se, but a feeling.”

“Art has a will of its own. It has nothing to do with the taste of the moment or what’s expected of you. That’s a formula for dead art, or fashionable art.”

“There are three subjects I don’t like discussing. My former marriage, women artists, and what I think of my contemporaries.” 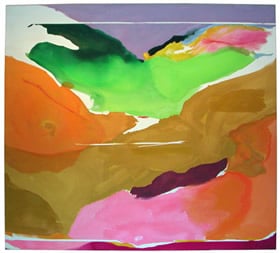 2 thoughts on “HELEN FRANKENTHALER AND A CRITIC, A PAINTER AND JOHN TRAVOLTA”