I vowed this year to keep up with what I’m reading and share it on a monthly basis. I hope to get some new ideas for books too – because I read every day! 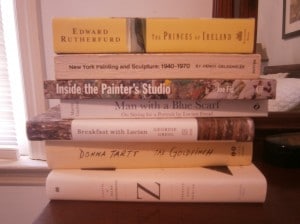 This is a sample of what I have stacked up to read!  Here is what I finished in February:

Everybody Was So Young: Gerald and Sara Murphy: A Lost Generation Love Story  by Amanda Vaill.  This was such an interesting biography.  Gerald and Sara lived in Paris and then the south of France. There they entertained Picasso, Hemingway, the Fitzgeralds, Stavinsky and others.  Gerald was an artist – and despite being exhibited at the Metropolitan Museum of Art – he packed up his brushes and abruptly quit. It is said the couple was the inspiration for the characters Nick and Nicole Driver in F. Scott Fitzgeralds Tender is the Night (I need to reread it now). Both Hemingway and Picasso may have been in love with Sara. The couple were friends with the Fitzgeralds until their sad demise. They also remained close to Hemingway. But if wasn’t all fun and games, there was alot of heartbreaks along the way. My synchronistic moment:  about 2/3 of the way through the book, Sara befriends Calvin Tompkins, who remains in the book until the end.  Last month I read Off the Wall: A Portrait of Robert Rauschenberg – written by – Calvin Tompkins.

Daily Rituals: How Artists Work by Mason Currey. This consists of little stories about daily habits of 160 artists – consisting of novelists, playwrights, painters, philosophers, scientists, composers and more. I could write an entire blog on this book and I plan on going back through it and keeping track of which rituals appear with frequency. Many of the people profiled took long daily walks and carried a notebook to jot down ideas. Thomas Wolfe wrote standing up in the kitchen. Trollop made sure he wrote 3000 words every morning before going to his job at the postal service. Stravinsky was unable to compose unless he was positive no one could hear him – and then stood on his head to clear his brain. Balanchine did his greatest work while ironing. The list goes on – enjoyable read.

The Blind Contessa’s New Machine  by Carey Wallace. I picked this book up on a bargain table in a book store (yes, in a real brick and mortar book store).  And yes, I did choose it based on the cover.  But it was a delightful find – a very small book.  It tells the story of an Italian contessa who goes blind and no one believes her, except for a local inventor and long time friend, Turri. Wanting to communicate with the Contessa, he builds what is thought to be the first working typewriter. I loved the magical realism in the dream sequences in the book, and I loved the fact it is a book of fiction that is based on a very obscure historical event.  Isn’t the cover inviting: 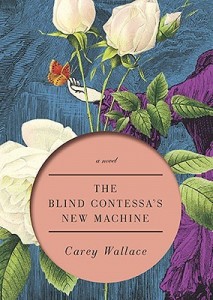 The Art Forger by B.A. Shapiro. Claire is an artist who makes a living reproducing famous works of art for an online company. She is approached by THE GALLERY OWNER in Boston to forge a Degas from a copy.  This is one of the paintings that was stolen in the famous Gardner Heist.  If you don’t know the story, click here.  Briefly it is the largest art heist in history when in 1990 two men went into the museum in the middle of the night and stole 13 pieces of art – none have ever been recovered.  All is not what it seems and I couldn’t put it down.  Another SYNCHRONISTIC moment in reading – forgers find a painting by a lesser known artist from the period of what they are forging and use that canvas.  In this book, a painting by the artist Meissonier was used.  Last month I read the book The Judgement of Paris, The Revolutionairy Decade That Gave the World Impressionism by Ross King.  Lo and behold, this book followed the career of Edouard Manet and Ernest Meissonier, who was the most successful artist in Paris at that time!  (and generally overlooked now)

Gustav Klimt, Painter of Women by Susanna Partsch. I haven’t read the entire book, but I have enjoyed looking at the plates in it.  Klimt is one of my favorite artists.  Below is an image of The Kiss – one of the most beautiful paintings ever.  If you ever get a chance to see a Klimt in person, don’t miss the opportunity. 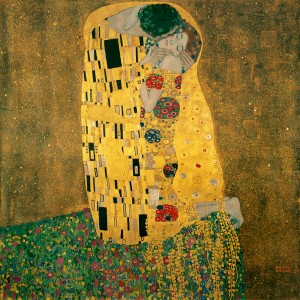 What am I reading now – actually I’m between books.  I did start a book about Henry VIII, but I realized most of the major characters are beheaded and I kind of lost my way – maybe I’ll pick it back up.

Last thing – what am I watching?  I discovered House of Cards and binged on it one weekend. I’m up to episode 8, I feel another binge weekend coming up!

What are you reading or watching?  Give me suggestions. 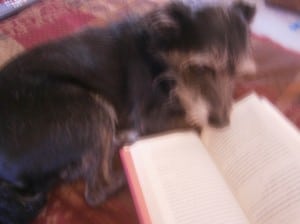 Ziggy likes to get in on the action too – he’s been caught pulling art books off the bookshelf. Why?  it is a mystery to us!