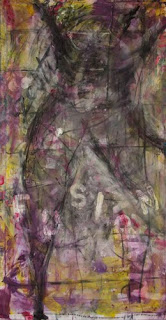 THE HIGH PROJECT was an experimental collaboration between one dancer and two local abstract artists while creating a three-dimensional canvas. I was one of the painters, along with my friend Lance Carlson. This was organized by Heather Harper, the Artistic Managing Director of the Harper Continuum Dance Theatre with Stacey Perkinson dancing.

The artwork was painted live while the dancer moved between the two canvases. The canvases were made of spandex, which allowed the dancer the freedom to move within the actual material. This was a fun project, but because it was at the High Museum of Art in Atlanta, we were restricted by the materials we used. In the end, we used primarily washable tempura paint. After alot of experimentation, we found watered down food coloring in spray bottles, as well as food coloring in shaving cream worked well too. We were also allowed to use charcoal. The piece featured abaove is my finished piece. When I started seeing a figure developing I concentrated on channelling DeKoonings large women paintings!

Because the canvases were so porous, we applied gesso to the canvases prior to the event. We didn’t want to cover the entire canvases, as we didn’t want to restrict the Stacey’s movements. We wrote words we felt had meanings in both the visual arts and the dance. We used the words Rhythm, Movement, Composition and Fusion. CLICK HERE TO SEE A VIDEO ON THE PERFORMANCE

We hope to repeat this at a future date – Heather has been contacted from as far away as Idaho with interest in the event!

For those of you not familiar with the High Museum of Art, it was founded as the Atlanta Art Association in 1906. Two decades later, the High family donated their family home on Peachtree Street , thus the name The High Museum! It now houses over 11,000 works of art in its permanent collection. 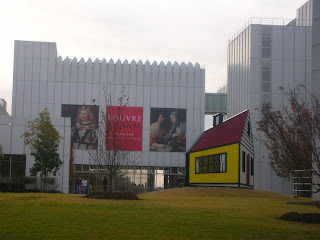