If it is true that you are what you read, in the past two months I have been a pig (a good good one at that), an African grey parrot, a hawk, a pigeon, various talking animals and a movie star!  So here goes – in the order they were read:

THE GOOD GOOD PIG – THE EXTRAORDINARY LIFE OF CHRISTOPHER HOGWOOD by Sy Montgomery – I met Christopher years ago on NPR.  Sy Montgomery, a naturalist who travels the world, and her husband adopted him as a small piglet, not knowing how big he would actually get (around 750 pounds, few pigs live to adulthood).  This is his story and also the story of a small New Hampshire town that adopted him, restaurants would bring him all the left-over food, in fact the entire small town ends up adopting him.  I fell in love with him and I am thankful I stopped eating pork years ago.

AMERICAN DIRT by Jeanine Cummins – I agree with Stephen King who said “I defy anyone to read the first seven pages of this book and not finish it”. I couldn’t put it down and I couldn’t predict what was coming. I was so emotionally involved with these characters that I did something I don’t ever remember doing before – I put it down for over a week before I finished the last chapter – I was fearful for some of the characters!

AFRICAN AMERICAN FOLKTALES FOR YOUNG READERS, FROM AFRICAN AND AFRICAN AMERICAN STORYTELLERS by Judith Dockrey Young and Richards Alan Young – This is a collection of thirty four folktales from Africa, the Caribbean, and the American South, divided  into seven categories: stories about heroic youngsters, animal fables, trickster tales, parables with human protagonists, larger-than-life heroes, scary stories, and modern Brother Rabbit tales. I picked this up in a Little Free Library and it was quite a treat to read.

Birdology: Adventures with Hip Hop Parrots, Cantankerous Cassowaries, Crabby Crows, Peripatetic Pigeons, Hens, Hawks, and Hummingbirds By Sy Montgomery –  I learned so much in this book and was thoroughly entertained.. One thing I learned, each bird has a unique personality – and they are more like us than I previously thought. One of the birds featured became an internet sensation – here is Snowball dancing.

AESOP’S FAVORITE FABLES; MORE THAN 130 CLASSIC FABLES FOR CHILDREN BY Milo Winter – I don’t believe I’ve ever read an entire collection of these. They are easy to read with great illustrations – ending with the lesson learned.

ALEX & ME: HOW A SCIENTIST AND A PARROT DISCOVERED A HIDDEN WORLD OF ANIMAL INTELLIGENCE – AND FORMED A DEEP BOND IN THE PROCESS BY Irene Pepperberg – I’ve read this book before and I loved the book and Alex just as much as I did the first time around. Alex had a brain the size of a shelled walnut, yet he could add, sound out words, understand concepts like bigger, smaller, more, fewer, and none,  He also has a big personality. If you have ever dreamed of talking to animals, you will love this one too!

ME TALK PRETTY ONE DAY By David Sedaris – It didn’t disappoint, but it isn’t for the easily offended. Sedaris makes absurdity seem normal! 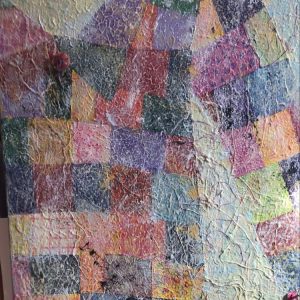 COAT OF MANY COLORS by Dolly Parton  (Author),Brooke Boynton Hughes (illustrator) – I got this book as inspiration for a piece of artwork I was working on knowing I would send it to my grand-niece when finished. It is delightfully illustrated and tells the story from the song Coat of Many Colors.

BREAKFAST OF CHAMPIONS by Kurt Vonnegut – Well worth the reread many many years later. And Kilgore Trout is in the book. To me, a win-win.

MOVIE STAR BY LIZZIE PEPPER – by Hillary Lifton – This is a beach read – kind of. It is basically a thinly veiled story of Tom Cruise and Katie Holmes. I read it in two sittings and don’t remember that much.

ECHOES OF THE SAME – by Nicki Salcedo – This was a book club selection by a local Decatur author. These essays come from a column called Intersections for Decaturish.com, a locally sourced news site based where I live. I liked her voice – what I didn’t like was the typos!

THE SOUL OF AN OCTUPUS: A Surprising Exploration into the Wonder of Consciousness by Sy Montgomery  – Okay – I read three books by Sy Montgomery in the past two months. I kept recommending this book when people were raving about the documentary – MY OCTUPUS TEACHER. I thought it was time to re-read it. An octopus is smart, and also curious and a bit of a prankster. I loved this quote about this book: “Sy Montgomery’s joyful passion for these intelligent and fascinating creatures will have you rethinking that order of calamari.” ― Library Journal Editors’ Spring Pick

NAKED by David Sedaris – Yes, this was my second David Sedaris book, and as hysterical as the other. You have to read all the essays to get to “Naked” – his time spent in a elderly nudist colony. As someone said, if you can’t laugh at his absurdity – you don’t have a sense of humor. Also – I stumbled upon the movie C.O.G. on Netflix which is based on some of the essays on his adventures apple picking in Oregon (on Amazon Prime).

THE GIVER OF STARS by JoJo Moyes – This was a book club read, and another book club had recently read The Bookwoman of Troublesome Creek. I thought they were very similar, but we started researching the possibility of plagiarism. My personal jury is still out on this one, but there are striking similarities.

I hope this gives you some ideas on what to read. What are you reading?