My reading quest is to read a book by an author from each state and I have made it to Illinois! 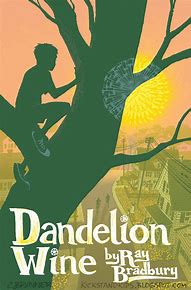 The book was Dandelion Wine by Ray Bradbury. I loved this book so much I read it twice!!!! I would give grudgingly give this book five stars! and that is because I’d give it 500 stars is I could!

It has been described as a nostalgic “autobiographical fantasy”.  Bradbury has recreated childhood memories of his hometown, Waukegan, Illinois, known in the book at Green Town.

Set during the summer of 1928, the main character is Douglas Stratton.  The title refers to a wine made with dandelion petals by Douglas’s grandfather, and refers to packing all the joys of summer into one bottle (or one book).A series of short stories, they are loosely connected with Douglas and his family as recurring characters. In fact, many of the chapters were published as individual short stories between 1946-1957.  While the plots are realistic, there is a touch of fantasy and magic  along the way!

Some of the wonderful things that appear in the book are:

“I’m ALIVE. Thinking about it, noticing it, is new. You do things and don’t watch. Then all of a sudden you look and see what you’re doing and it’s the first time, really”. 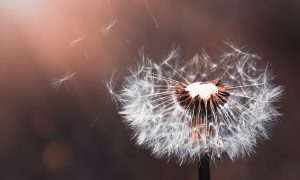 The book is full of magic!!!

Ray Bradbury said that Douglas is based on himself. In fact, “Douglas” was his middle name, and “Spaulding” was his father’s middle name. It is the first book of a trilogy continuing with SOMETHING WICKED THIS WAY COMES and FAREWELL SUMMER.

In 1972, the Apollo 15 astronauts named a moon crater “Dandelion Crater” after this novel!

Ray Bradbury (1920 – 2012) wrote in many genres, but his most famous books are probably Fahrenheit 451 and The Martian Chronicles.

Here are some (what I consider magical) quotes from the book:

Now I will be reading books by authors from Indiana and Iowa. If you have any favorite authors from those states, let me know!