“When Matisse dies, Chagall will be the only painter left that understands what color really is”  – Pablo Picasso 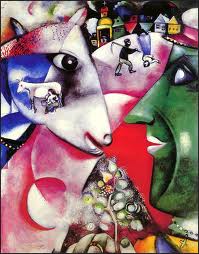 Art critic Robert Hughes said Chagall was “the quintessential Jewish artist of the twentieth century”. He is considered one of the most successful artists of the 20th century.  An early modernist, he created works in many mediums, including painting,  illustrations, stained glass, stage sets, and fine art prints to name a few.

Born Moishe Shagal in Belarus, he was the oldest of nine children of a very close knit Jewish family.  Images from his happy childhood appear in his work throughout his lifetime.

In 1910 he moved to Paris and stayed there for four years.  In 1914 he returned home, married, and initially supported the Russian revolution.  He was appointed Commisar of Fine Arts for Vitebsk and established a progressive art school.  But the infighting at the academy and political pressures forced him out.

The Chagall’s then moved to Moscow and he became the artist for the Moscow Yiddish State Theater and taught art in a Jewish orphanage.  But, he eventually returned to Paris and became a French citizen in 1937.  Because of the Nazi occupation of France, he fled to the US and stayed there until 1948.

The painting shown above is the inspiration for the 1964 musical Fiddler on the Roof.  The original Broadway set designer was Boris Aronson, who worked with Chagall at the Moscow Yiddish Theater.

The painting is considered Cubist – with vibrant colors of red, green and blue.  To me it is dreamlike, with goats, farmers, a violinist (Chagall played the violin) and houses, some of which are upside down.  The foreground has a green-faced man wearing a cross staring directly at a goat – which has another goat superimposed being milked.  In the background are houses, an Orthodox Church and a man dressed in black.

This powerful painting can be seen at the Museum of Modern Art in New York City.

Here are some quotes from Chagall:

“The dignity of the artist lies in his duty of keeping awake the sense of wonder in the world. In this long vigil he often has to vary his methods of stimulation; but in this long vigil he is also himself striving against a continual tendency to sleep.”

“Work isn’t to make money; you work to justify life.”