Yes, in the month of read a book about an allegory (in a painting), a biography of an author that wrote many books under an alias, and three books about Alzheimers. 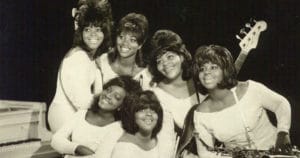 THE DITCHDIGGER’S DAUGHTERS by Yvonne Thornton MD – This inspiring book was written by one six daughters born to a laborer that worked two 8 hour jobs for 25 years. Donald Thornton wanted all of his daughters to become doctors and be successful independent black women. This is the journey of a family, even becoming a successful band, The Thornton Sisters. Mr. Thornton’s was tough, he was strict, but he gave out the wisest and wittiest advice! All of his daughters succeeded. Did they all become doctors? You’ll have to read it to find out. Here is a little clip of the band.


THE THINGS WE KEEP by Sally Hepworth – This was a book club selection – in fact, I went to an encore discussion that was demanded by members that missed the first discussion.  Anna Forster has early onset Alzheimers, diagnosed at age 38, Her twin brother moves her into Rosalind House, where she meets Luke, who is near her age. When their relationship turns romantic,  a tragic incident causes their families to keep them separated. Is Anna capable of falling in love? Is she be taken advantage of?

There is a supporting older lovable, but quirky elderly characters. The home’s new cook, Eve, gets involved in Anna and Luke’s story and breaks rules to keep them together. Eve’s seven year old daughter understands some of the older people better than anyone. It is written in a non-linear structure, and this mimic’s Anna’s growing disorientation. But it also keeps you wondering about what really happened. All is revealed in the end. Surprisingly, the book isn’t maudlin, some of it is downright funny. While there is no happy ending today for anyone with Alzheimers, I did feel gratified at the end for the future of Anna and Luke. 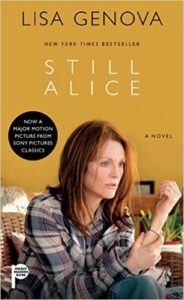 STILL ALICE by Lisa Genova – I know – you are probably thinking, wasn’t the previous book enough?  Alice, a world-renowned linguist professor at Harvard, diagnosed with Alzheimers at age 50, with a husband that equally as successful. It is written with a third eye, but the story is told mostly through Alice’s point of view. It starts with Alice innocently forgetting things that she thinks are due to menopause and her busy life. When she gets lost and forgets appointments, she seeks help without telling anyone. Of course, the news is devastating and she has to share it. Because you see most of the book through Alice’s eyes, you see her increasing confusion over the course of the  book. The climax of the book is a speech she delivers to the Annual Dementia Care Conference.

“Being diagnosed with Alzheimer’s is like being branded with a scarlet A. But I am not what I saw or what I do or what I remember. I am fundamentally more than that..Please don’t look at our scarlet A’s and write us off.”

The book shows the family adjusting their lives and making compromises. It is told honestly and compassionately.  But, there is no happy ending with this disease.

Lisa Genova has a Ph.D. in neuroscience, so she did her research. This is a self-published book which she sent to the Alzheimer’s Association, which endorsed the book.

Yes, I cried. No, I haven’t seen the movie. I will some day, just not today.

THE RED LEATHER DIARY – by Lily Koppel – This was part of a challenge from a group to read a biography by a woman about a woman (of course, I read more than one). Lily Koppel finds a red leather diary locked away in a steamship trunk. It is the the diary of Frances Wolfsen, one she wrote in daily from 1929 through 1934. Not a single day was missed!

Here is a story of a gilded age of the upper West Side. Florence lunched with her friends, went to the nightclub El Morocco at night, shopped at Bergdorf’s, road horses at the Claremont Riding Academy and more. She tells of her first kiss (to a boy), her infatuation with with a famous actress, the starting of a literary salon in her parents apartment.  Even though she is a somewhat spoiled headstrong girl, she is also creative and intelligent.

Koppel searched for Florence, even hiring a private detective. She eventually locates her in her 90’s in Florida and reunites her with her long-forgotten diary. It was a fun book to read! 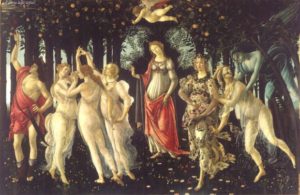 BOTTICELLI’S SECRET – by Marina Fiorato – You know you are in trouble when you have to print out the picture of the painting the book is about! This was a book club selection – and it is a book club of women artist’s. It was billed at The DaVinci Code meets The Birth of Venus. But, the painting at the center of the mystery is not the Birth of Venus, but La Primavera. taking place in the 15th century, with prostitute Luciana Vetra posing for the above painting (she is the figure in the center). When Botticelli doesn’t pay her, she steals an unfinished version of the painting. As the bodies pile up, she turns to a priest, and together they go to nine cities in Italy. Are there really secrets embedded in the painting? There has been much speculation about the hidden meanings found in this painting, and this is an interesting take on it. But, the first part is a little tedious, the language profane and explicit.  Yes, Luciana’s potty mouth gets tedious, and I found her language a little too modern at times. (I even looked up several words to see if they were used in the 15th century!). And I learned Italy wasn’t unified as a country until 1815.

LOUISA MAY ALCOTT: A Personal Biography by Susan Cheever  – The book I often credit with giving me life long love of reading is Little Women.  It was also my mother’s favorite book, she tried to name me Jo when I was born (my father said no daughter of his would have the name of a boy). So, when I was challenged to read a biography about a woman, written by a woman, I was delighted for find this one. It is a fascinating portrait about an intriguing time of American literature. Her father was a transcendental teacher. When she was young, the family moved to Concord, Massachusetts. It seems whenever the family had financial problems and had to move (which was often), Ralph Waldo Emerson came to their financial help. Other family friends included Henry David Thoreau and Nathaniel Hawthorn. Louisa went to work early as a teacher and seamstress. During the Civil War, she was a nurse in in Georgtown DC for six weeks. catching typhoid, and while she recovered, her health suffered the rest of her life. Her letters home were collected for her first critical recognition. The family also worked for the Underground Railroad.

The most surprising thing I learned is she published sensational pulp fiction under the name A.M. Barnard, a fact that wasn’t discovered until after her death. Incidentally, she died two days after her father – in fact, they had the same birthday.

BEFORE I FORGET: LOVE, HOPE, HELP AND ACCEPTANCE IN OUR FIGHT AGAINST ALZHEIMERS by B. Smith and Dan Gasby – This book was recommended to me by someone in my Alzheimer’s Support Group. It is the story of B. Smith, model, restauranteur, author, and talk show host. She is diagnosed at a fairly early age, 65-66. Much of the book is written by her husband, Dan Gasby, along with Vanity Fair contributing editor Michael Shanayerson. It is an honest account of the journey, told by her husband Dan, with portions written by B. herself. But it is also a true love story. It is sprinkled in with hard research, lessons on dealing with, and again love. I’m going to end this with a quote from B herself:

“I know where I’m going. I’m still myself. I just can’t remember things as well as I once did. So on short trips, I work hard not to be confused. I’ll say to myself, What are we going to do? How long are we staying? It’s like I’m talking to my other self—the self I used to be. She tells me, This is what we need to buy—not that. I’m conscious of that other self guiding me now.”

Watch this short video of B. and her husband – it only 2 minutes long.


As you may know, my mother is in memory care now. It is a long journey. The people with the disease need advocates, they can’t speak for themselves. Research for the drugs can run into the billions of dollars.

What can you do? Consider registering with the Brain Health Registry  – it is easy, and it is free. And it will help with understanding the disease and hopefully for a cure, because with this disease, no one gets well,  no one gets out, at least not now.

My  niece Mallory is doing the  Walk to End Alzheimers. Consider making a donation, no amount is too small. Click on her page here to read what she has wrote. Think about it, if you haven’t been touched by the disease, consider yourself lucky, for now.

If you have anything to share about this subject, leave me a comment. I will read them all!

5 thoughts on “AUGUST – A MONTH OF ALLEGORIES, ALIASES, AUTHORS AND ALZHEIMERS”