THE MEMOIRS OF SHERLOCK HOLMES by Arthur Conan Doyle: The game is afoot!  I’m a big fan of Sherlock! I love the BBC show, I love the CBS show. This is 11 “adventures”, ending with the The Final Problem – as Sherlock Holmes and the evil Dr. Moriarity fight at Reichenbach Falls in Switzerland. Doyle wanted to kill off Holmes, but public outcry was very loud. Written in 1894,  It is a free download on Kindle – click here.

I KNOW WHY THE CAGED BIRD SIGNS by Maya Angelou: This is part of my quest – which is reading a book by an author in each state of the union, and this is my Arkansas selection. Read about my quest here.  This is the first of seven books about Angelou’s life. I will write it’s own blog soon! By the way, excellent book!

THE FAT RULES by Misti Mosteller: A free download, a quick and easy read. The story of Maddy, overweight since childhood and now in college trying to be invisible. It is interesting to see the pain through her eyes. Because of an event involving a family meal, Maddy decides to take control of her own life. Remember, this is in literary land, so she loses the weight in a year and exacts payback where needed. Even so, it is both funny and touching.

PLAY DIRTY by Sandra Brown: I picked this up in a thrift store. A pretty good mystery, but not very realistic. It follows Griff, a disgraced football player recently released from prison. A paraplegic billionaire approaches Griff for a job, which involves the billionaire’s wife and the dream of having a child.  This is job is further complicated when an older murder resurfaces that Griff is suspected of committing. I couldn’t put it down, but that doesn’t mean it is a great book, but it is a page turner.

PINK BALLOONS AND OTHER DEADLY THINGS by Nancy Tesler: Carrie’s husband leaves her for a much younger women, and when she is found dead, of course Carrie is a suspect.  A cute page turner, but I found Carrie, who is a bio-feedback therapist, unsympathetic.

THE GODFORSAKEN DAUGHTER by Christina McKenna: Having read a previous book by this author, The Misremembered Man, I quickly picked this up (okay, I downloaded it!). It is the third book in a trilogy, set in a small town in rural Ireland.  It is the story of Ruby, who was happy working the farm with her father. When he dies, she she is forced inside and cares for her critical mother, who coddles her younger twin sisters. When she finds her grandmother’s suitcase in the attic containing a mysterious but empowering book her mother believes Ruby is going crazy. Enter a kindly priest, a psychiatrist who has his own secret, and the local bachelor farmer (who appeared in the previous book). It is an interesting book, dealing with loneliness, friendship, empowerment and also people going into hiding because of The Troubles involving the IRA. I enjoyed this book, but I enjoy reading about life in Ireland. 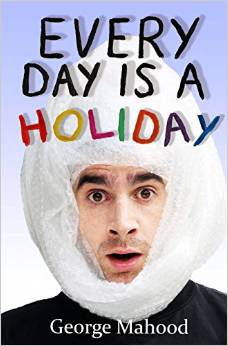 EVERY DAY IS A HOLIDAY by George Mahood: This book is funny!! And, in it’s own weird way, education all!  George decides he is going to celebrate a different holiday everyday. Every chapter is devoted to a different holiday – as he goes out of his way to celebrate them all in his own way. Along the way, he eats ham every day for a month, he punches holes for an entire day to have hanging chads (for Dimpled Chad day on January 4). There are so many “official” silly holidays out there, and George finds one for each day (this book covers six months). By the way – as I write this on May 2, which is the first Saturday in May. Lo and behold, the first Saturday of May is  World Naked Gardening Day – how do you plan on celebrating it?

TRUE STORY, MURDER, MEMOIR, MEA CULPA by Michael Finkel: In watching a news story about the recently released movie True Story, I was intrigued, so I immediately downloaded the book and devoured it. Crazy crazy story. Christian Longo kills his wife and three kids and is found in Mexico impersonating a recently fired New York Times reporter, who wrote this book. This is the book about their relationship. I couldn’t put it down, damn those instant downloads sometimes!

MAISIE DOBBS by Jacqueline Winspear: Thank you all! Several of you pointed me in the direction of this wonderful character and now I will read more of this series! Maisie was a maid in an upscale London home at 13. Her employer, a suffragette, becomes her benefactor, after recognizing Maisie’s intelligence and intuition. Using these skills. Maisie hangs out a shingle as a private detective. Her first case seem innocuous at first, a husband wondering if his wife is having an affair. When she finds graves with only the first names of men that were shattered in WWI, she learns more is going on! It was good, dealing with a decent mystery, as well as social reform needed for those returning from war with disfiguring wounds and suffering from depression.

And, in ending, I read another book, dutifully wrote down the title. When I googled it to link it,  I found several books with the same title. I couldn’t remember which one I read! That must have been  rainy Saturday afternoon read – maybe I should have taken a nap instead!  Lately my dreams have been more interesting than this unnamed book – – –  like the dream with the elevator – – and a plane that took you to all the floors above the 40th floor – – – –

13 thoughts on “APRIL READING – CLASSICS, MYSTERIES, AND A LITTLE HUMOR”