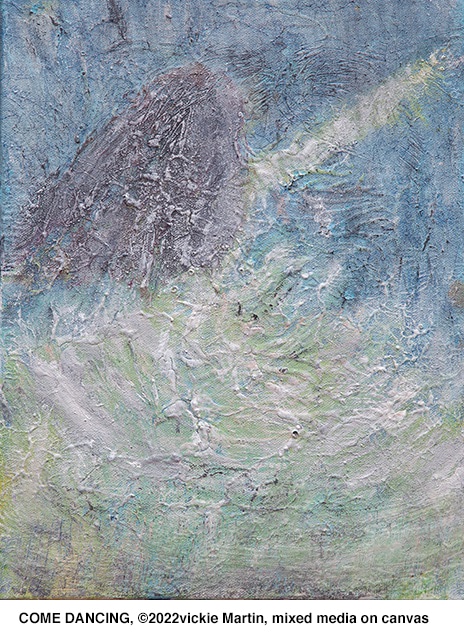 I have been asked why I used a woman in the artwork I created inspired by the song “COME DANCING”. Well, there is a reason.

The seemingly happy catchy song was written by Ray Davies in 1982 and recorded in 1983. His sister’s  visit to  England (she had emigrated to Canada) happened to coincide with Ray Davie’s 13 birthday. He had begged his parents for a Spanish guitar, to no avail. Rene stepped in and got it for him (his first guitar!).

Then she did what she always did when she was in town – she called her friends to go dancing that night. So – off she went to the Lyceum ballroom. But, she suffered a fatal heart attack, as a result of a childhood bout of rheumatic fever.

“Rene had died dancing in a ballroom in London in the arms of a stranger….Coming back from Canada, where she’d emigrated, to die.   Really, and again, being a source of inspiration…She gave me my first guitar, which was quite a great parting gift.” Ray Davies 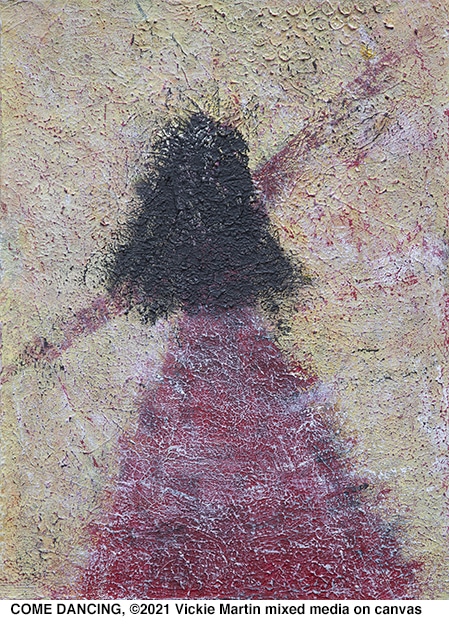 Finding stories like this are one of the reasons I love working on this series “CAN YOU SEE WHAT I HEAR?”. I also learn to play each song on the piano. 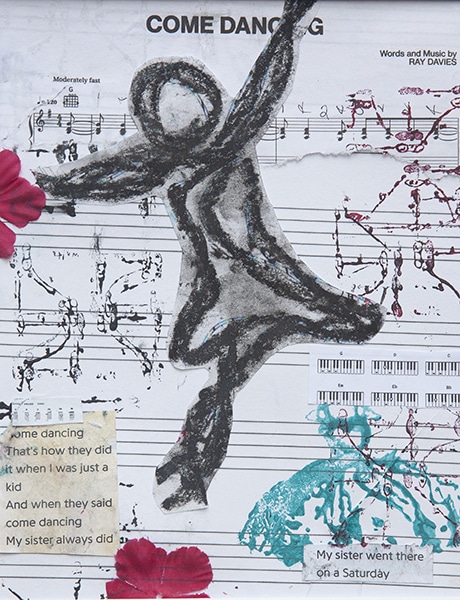 I usually do a collage using research materials I collected for the painting. Look closely at this collage. You can see where I hand wrote the beats for the tricky timing in the opening!

You can read more about the series and my quest for the series “CAN YOU SEE WHAT I HEAR?” series HERE. Each piece I create is inspired by a song that I also learn to play. Why? to bring awareness to dementia, because music is the last memory, the one thing you will keep.

They put a parking lot on a piece of land
When the supermarket used to stand.
Before that they put up a bowling alley
On the site that used to be the local palais.
That’s where the big bands used to come and play.
My sister went there on a Saturday.Come dancing,
All her boyfriends used to come and call.
Why not come dancing, it’s only natural?

Another Saturday, another date.
She would be ready but she’s always make him wait.
In the hallway, in anticipation,
He didn’t know the night would end up in frustration.
He’d end up blowing all his wages for the week
All for a cuddle and a peck on the cheek.

Come dancing,
That’s how they did it when I was just a kid,
And when they said come dancing,
My sister always did.

My sister should have come in at midnight,
And my mum would always sit up and wait.
It always ended up in a big row
When my sister used to get home late.

Out of my window I can see them in the moonlight,
Two silhouettes saying goodnight by the garden gate.

Now I’m grown up and playing in a band,
And there’s a car park where the palais used to stand.
My sister’s married and she lives on an estate.
Her daughters go out, now it’s her turn to wait.
She knows they get away with things she never could,
But if I asked her I wonder if she would,

Come dancing,
Come on sister, have yourself a ball.
Don’t be afraid to come dancing,
It’s only natural.

Come dancing,
Just like the palais on a Saturday.
And all her friends will come dancing
Where the big bands used to play.

If you have a favorite song you’d like to see represented, I’d love to know.