In case you aren’t familiar with my reading quest, I am currently reading a book written by someone from each state in the United States.

I read not one, but two books written by Sarah Smarsh from Kansas. Born in rural Kansas, she grew up on farms in small towns. Her family moved frequently and she attended eight schools before reaching ninth grade. Attending the University of Kansas, she received her MFA in nonfiction writing from Columbia University (not a small feat!). 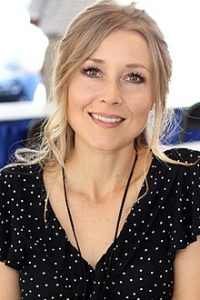 HEARTLAND: A MEMOIR OF WORKING HARD AND BEING BROKE  IN THE RICHEST COUNTRY ON EARTH

This is not only a powerful but a very relevant book. As Smarsh says “You can go a very long time in the country without being seen.”

Born into a family of farmers, she traces her family through five generations of teenage pregnancies – her mother was just 17 when Sarah was born.

During her childhood, in the 1980’s, family farms were going under – sometimes a victim of foreclosure, but also often the growth of giant agribusinesses. Her father began taking any job he could get, roofing, driving semi trucks and even disposing of poisonous industrial chemicals – one that almost killed him, resuting in years of debilitating psychosis.

The family was living below the poverty line, while at the same time considering themselves middle class. She writes:

“That we could live on a patch of Kansas dirt with a tub of Crisco lard and a $1 rebate coupon in an envelope on the kitchen counter and call ourselves middle class was at once a triumph of contentedness and a sad comment on our country’s lack of awareness about its own economic structure. Class didn’t exist in a democracy like ours, as far as most Americans were concerned, at least not as a destiny or an excuse. You got what you worked for, we believed. There was some truth to that. But it was not the whole truth.”

If there is an underlying question that begs to be answered, it is how did Smarsh get out?

How did a member of the sixth generation end up with a graduate degree from Columbia, a down payment for a house, and a memoir that is nominated for the National Book Award?  There is no single answer, even she doesn’t know if herself. She suggests she had supportive male role models – her father and grandfather – in a family where many women were prey to dangerous men. She abstained from teenage pregnancy – but she was talented and worked hard. Going to the University of Kansas on a merit scholarship, she also had three jobs lined up – this is the only thing that made college possible for her.

Is it a rebuttal to Hillbilly Elegy?  Could be, because she proves that poverty is not the result of laziness and bad choices, and the American Dream is not always possible for even those that work hard.

Not a political book, she does point out most of her family are Republicans, which for them is a matter of pride, even if it means they are voting against their best interests.

“People on welfare were presumed ‘lazy’, and for us there was no more hurtful word.”

When she is admitted to college on a federally funded program for minority, first-generation, and low income students, she found the handful of those in the program called themselves “White Trash Scholars”.

This is not a sentimental book, but she makes a powerful point that much of the “American World” has taught them they are disposable.

It seems as if the second book would be a perfect fit, but actually I read this book first.

SHE COME BY IT NATURAL, Dolly Parton AND THE WOMEN WHO LIVED HER SONGS – While Sarah Smarsh was growing up in poverty, she heard songs by country female artists  telling powerful stories of life, hard times and surviving. It was a language among the women – and no one said it clearer for them than Dolly.

This was originally published in a four-part series for THE JOURNAL OF ROOTS MUSIC. Smarsh feels Dolly’s songs have validated women who are invisible – the “trailer trash” women who are struggling. Dolly began singing on the front porch of her family home,  achieving stardom in Nashville – a world managed by powerful men. Along the way, she managed to found both a self-made business and philanthropy empire, in her own terms. Go Dolly!

Kansas really is as flat as a pancake as it was compared topographically to an IHOP pancake.

White Castle – the first hamburger chain was started here. Weirdly, there are no White Castles in Kansas at this time.

The amount of wheat grown here would stretch all the way to the Pacific Ocean from Kansas.

The helicopter was invented in Kansas.

Next I travel to Kentucky and then Louisianna – and I have my books picked out for these states. But then I travel to the “M” states (of which there are eight!).

If you have requests for the authors from the remaining states – let me know!