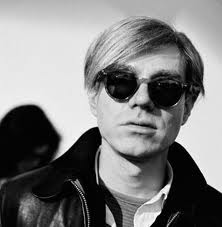 I don’t  know what you think of Warhol, in fact, I’m not sure what I think of Andy. Everybody knows his name, and outside of Dali’, no artist has been better at marketing art.

Coming from the world advertising, I ask when does self -promoting hurt your art? I don’t know the answer.

I talked to a gallery owner in New York, and he felt Warhol would come to “a door if it was opening”.

What does 15 minutes of fame really mean?  It was interesting to find the saying has a Wikipedia page – here

I have read the books – here are the links

Then there are the movies – how many actors have portrayed Warhol? Actually seven to eight depending on where you look.  Here are my favorite movies.

Crispen Porter in The Doors

Who was the best Warhol?

The images of Crispen Porter and Guy Pierce as so similar I had to quadruple check the images!   Who do you think was the best?

What is your favorite Andy Warhol painting?  Marilyn, Jackie O, Campbell Soup Cans (which I bought the limited edition at Target)