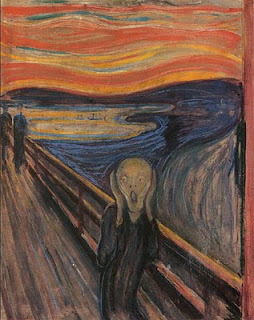 I just finished reading The Rescue Artist  by Edward Dolnick.  This is a rollicking ride of a book about the theft of Edward Munch’s The Scream in 1996 in Oslo on the day of the opening ceremonies for the Olympics in Lillehammer.  In the early morning, two thieves stole a ladder, propped it up to the museum, broke a window, grabbed the painting and slid it down the ladder.  Not only was it caught on film –  it took less than a minute.

As I read this book, I became intrigued with facts about art theft,  as well as historical facts about artwork that had been stolen.  As I read, I jotted down these facts and thought I would share them.

First of all, Interpol estimates that between $4-6 billion dollars changes hands a year relating to stolen art.  It is the #3 crime in the world, behind drugs and arms.   But, it usually doesn’t get the attention of the other crimes unless someone has been hurt.

There are only 36 Vermeers in the world, three of which have been stolen recently.  This book was written in 2005, and at that time, if there was what the author called A Museum of the Missing, it would include 551 Picassos, 43 Van Goghs, 174 Rembrandts, 209 Renoirs, along with the 3 Vermeers, and Caravaggios, Titian’s among others.

The recovery rate of stolen art is around 10%.  Stolen art when sold is generally sold for 10% of the value.

The Gardner Heist, which took place on 3/16/1990 is the Holy Grail in the world of art thefts  = $300 million dollars in art was stolen and nothing has been recovered.

It is said it is easier to steal a work of art from the Louvre than from you local department store.  In May 1998, someone walked into Room 67, a room without a camera and no guard.  A Carot was taken out of the frame and the perpetrator probably calmly walked out the front door and was gone before it was missed.  It is estimated to be worth $1.3 million!   The Louvre is 800 years old and was built as a palace. The security cameras don’t cover all rooms, and they work independently, there isn’t a central location for viewing.  (Note – The Mona Lisa was stolen in 1911, and wasn’t missed for 1/2 a day!)

The National Gallery in Oslo, where The Scream was stolen has been hit several times.  In 1980 a drug addict walked in and took a Rembrandt off the wall and sold it for $10,000.  It was recovered in Paris.
In 1993, in daytime and at the time of a shift change for the guards while a television crew was filming in another room, another $300,000 Munch was stolen.

The most stolen painting of all time is Rembrandt’s portrait of Jacob III de Gheyn.  It is very small, not quite 8×10 and has been stolen FOUR times – luckily it has been recovered four times.

Goya’s portrait of The Duke of Wellington disappeared in 1961 from the National Gallery in London, who has just purchased it.  Before it was recovered, it made an appearance in Dr. No (the first James Bond movie) in the villian’s Caribbean hideway!

Unlike stolen cars, stolen art can be locked up and the value will be kept (often going up after recovery).  Art is often used as barter for illegal weapons or counterfeit money.

Why is art stolen?  Most thieves will say because it is easy to do. 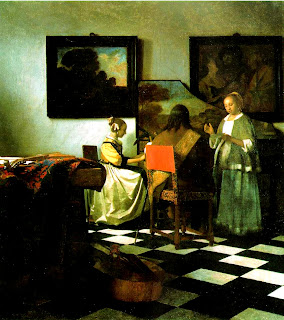 SOME FACTS ABOUT VERMEER

The painting you see here is Vermeer’s The Concert, which was stolen from the Gardner Museum and hasn’t been seen since.  Very little is known about Vermeer, but I did read some interesting things in this book about him.
He died at age 43.  His wife gave the painting The Lady Playing A Guitar to the bakery to pay for past debts worth less than $80.  That painting now is worth a minimum of $50,000,000, and possibly as much as $100,000,000.   Remember, there are only 36 of them in existence, and 3 are presently stolen.
I found this blog, Stolen Vermeer  which is devoted to the recovery of the Vermeers.
Vermeer was part of the Delft Art Guild, so he had to apprentice.  It is not known who he apprenticed with, but it is known he did not have any students.
He was an obscure artist until 1866 when a French critic wrote three articles about him which caused the Impressionists to become fascinated by his use of light.  In fact, he had become so obscure, the Louvre sold The Head of a Girl in 1813 for what would be around $15 today.  They sold The Lacemaker for the equivalent of $400.  Amazing!

WHY THE SCREAM CAN NOT BE FORGED

The Scream was painted with tempera (basically poster paint) and pastel and chalk on untreated cardboard.  Little known facts about the painting are:
In the red bands across the sky, someone has written “This must have been painted by a madman”.  This is not in Munch’s handwriting.  No one knows who wrote it, possibly during an early showing of the work. (I wonder if it is written in Danish!)
On the side there is a vertical red stripe.  Munch took a sharp knife to it and slit it and then changed his mind about cutting it off and covered it with green paint.
Munch painted late at night.  One night he blew out a candle and some of the wax splattered onto the painting.  Forensically, you can’t blow two candles out the same way twice, so the wax splatter could not be replicated.
On the back of the painting, there is another painting of The Scream that is cruder (and upside down).  Apparently Munch didn’t like it and turned the cardboard over.  In fact, there are four versions of The Scream, this and one at the Munch Museum being the most recognized (and that one was stolen in 2004!)

By the way, the book The Rescue Artist won an Edgar Award given out by the Mystery Writers of America Guild.

Now, to find out how The Scream was recovered, you will have to read the book!   What next?  I think I’m going to read The Forger’s Spell: A True Story of Vermeer, Nazis, and the Greatest Art Hoaz of the Twentieth Century.

2 thoughts on “SOME FACTS ABOUT ART THEFT AND VERMEER, AND WHY THE SCREAM CANNOT BE FORGED”