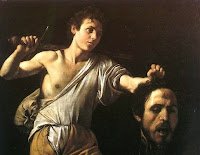 “GREAT ART HAS DREADFUL MANNERS” Schama says at the start of this series.

Who is Simon Schama and what qualifies him to produce a series for the BBC titled THE POWER OF ART? Schama is the University Professor of Art History and History at Columbia, previously teaching at Cambridge and Harvard. In the documentary series, THE POWER OF ART tells the story of eight remarkable artists and how they transformed the world of art.

I had seen some of this on PBS last year, and decided to start at the beginning. First up is Michelangelo Merisi de Caravaggio. Schama delivers his story with an almost boyscout zeal of enthusiasm and passion, asking Caravaggio questions, which he then answers.. The documentary has three elements; Schama standing in front of a particular piece of art, Schama standing in a place that was important to Caravaggio, and last but not least, effective recreations.

The result was a fascinating story of an artist whose dramatic life was as dramatic as the paintings he painted. Even though he was considered dangerous, he never lacked commissions. He was jailed frequently, and actually killed a man in a duel and was forced to leave Rome with a price on his head. He fled to Naples, and finally to Malta, where he actually became a knight. He often tried to paint his way out of trouble, which is exactly what he was doing with the painting shown above. He painted it to give to the Pope’s counsel in payment for a pardon. Along the way back to Rome he was jailed again, left by the boat, and died of a fever.

Why is his art important? When he arrived in Rome, art consisted primarily of beautiful paintings of Christ, Mary and the apostles. Caravaggio believed Christ was human, made of flesh and blood. He proceeded to paint him that way, making people more earthy and physical, something that had never been done before. He took his models from the street, taverns and brothels. With this, he changed forever what a painting could do, bring the viewer into the painting and often making them very uncomfortable. His paintings began a shift to naturalism with an almost theatrical use of lighting. Art was no longer “safe”.

Watch the dramatic first 10 minutes here. The question Schama poses in the first 10 minutes was why would Caravaggio paint a self portrait of himself as the severed head of Goliath. I was hooked!