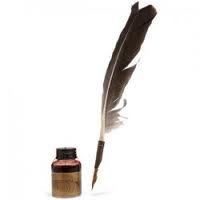 I didn’t know quill pens had such an interesting history!

First used around 600 AD in Spain, they were the main writing instrument until the mid 19th when the introduction of metal introduced the metal nib.

They are made from the stiff-spined flight feathers on the leading edge of a bird’s wing. And for you bird lovers, they were feathers that were discarded by birds during their annual moult. There were only two or three feathers found per bird.

Goose feathers were most commonly used, with more expensive swan feathers used for larger lettering. However,  only in the USA feathers from the crow, eagle, owl, hawk and turkey were used.

To construct a pen, the shaft of the feather was cleaned, carved and then sharpened, with a slit cut at the point making a nib.

On a true quill pen, the barbs are completely stripped away.  Later, some decorative barbs were left on the top. In short, the fancy plumed quill pen is an invention of Hollywood. (A barb is defined as one of the parallel filaments projecting from the main shaft of a feather.)

Thomas Jefferson actually bred geese to make sure he always had a supply of quill pens handy.

AND, to this day, 20 goose-quill pens are placed at the four counsel tables each day in the U.S. Supreme Court while in session: and it is said “most lawyers appear before the Court only once, and gladly take the quills home as souvenirs”.  This has been done since the beginnings of the court. Historic documents written by a quill pen include the Magna Carta, The Declaration of Independence and the Constitution of the United States.

As noted below, artists used the quill pen also.  However, Rembrandt favored the reed pen.

Wan to make your own quill pen?  Click here for directions!  If you make a quill pen or use one, leave me a comment, let me know. 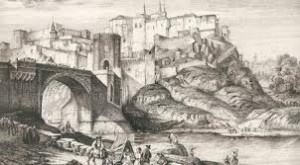