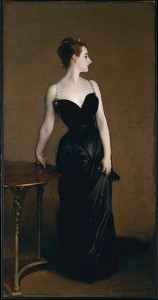 The Portrait of Madame X, by John Singer Sargent

This painting created quite a scandal when shown in Paris in 1884. Painted by John Singer Sargent, it is the portrait 0f Virginie Amelie Avegno Gautreau, an American expatriot married to a French banker. She became notorious for both her beauty and for her infidelities, and even though she craved attention, this portrait ruined her reputation forever. She retired from public life, and it is said she destroyed all the mirrors in her home.

Sargent was considered a rising star at the time the portrait was painted. He fled to England and slowly recovered from the scandel.

This painting was not commissioned, and Gatreau refused to purchase it. Sargent kept it and hung it in his London studio.  He started displaying it in international exhibitions and sold it to the Metropolitan Museum of Art in 1916 saying “I suppose it is the best thing I have ever done”.

If you want to know more about the painting, there is an interesting book – Strapless by Deborah Davis which also goes into the world of American ex-patriots living in Paris,  where many of the characters could be from fiction rather than non-fiction.