Fifty years ago today, on June 3, 1962,  the art community in Atlanta was forever changed.  After a three week trip to Europe, members of the Atlanta Art Association were returning home to Atlanta on a chartered plane.  The plane crashed on takeoff, killing all but two stewardesses.  At the time, it was the worst single plane crash in history.
“It was the Titanic of our city.  When it happened, it took a lot of leaders, important people at the time.” says Ann Uhry Abrams, author of “Explosion at Orly, The Disaster that Transformed Atlanta”.  The group included artists, civic leaders, heads of businesses, overall, an influential group.  They had traveled to Europe partly for pleasure, but also to show the city had a commitment to culture.
Out of this grief,  the citizens of Atlanta realized something needed to be done to memorialize the crash victims.  They knew the tiny museum located in an old house needed to be improved.  Ground was broken on the fourth anniversary of the crash for the Memorial Arts Center.   It opened in 1968, and was the first arts center that housed both visual and performing arts in the same venue, which included the Atlanta College of Art (now part of SCAD, Savannah College of Art and Design), The Atlanta Symphony Orchestra and the High Museum of Art.  The Alliance Theatre was added in 1970, and in 2005 Young Audiences was added.   This addition ensures the PreK-12 programs will serve more than one million children annually, the largest base of an arts center in the country.
It was renamed the Woodruff Arts Center in 1982 to honor the great benefactor, Robert W. Woodruff, also known in Atlanta as Mr. Anonymous.
The French government donated Rodin’s “The Shade” to the High Museum in memory of the crash victims.  It now stands outside with the names of all the victims surrounding it.  The crash victims had seen Whistler’s Mother at the Louvre,   In a gesture of goodwill, the Louvre loaned the painting to the museum in the fall of 1962 – it’s first appearance in the US.
The High Museum now holds more than 11,000 works of art in its permanent collection

33 children were left without parents after the crash
Martin Luther King and Harry Belafonte cancelled a sit-in in downtown Atlanta as a concilliatory gesture for the grieving families.
Andy Warhol painted his first “disaster painting” 129 Die in Jet, based on the cover of the New York Mirror the day after the crash.
The plane was known at the Chateau de Sully
The High Museum is named for the High family that donated their home to the museum in 1926.

Every once in a while I see or read something that really gets under my skin and makes me want  to learn more.  This happened recently upon seeing a production of the play RED in Atlanta, with Mark Rothko in the center.   This is not a review of the play (even though I thoroughly enjoyed it), but some of the things I learned from reading about both the play and Rothko.
RED is a two person play set in the late 1950’s when Rothko was painting his murals for the Four Seasons in New York.  If you don’t know this story, Rothko accepted a commission to paint a series of murals for the Four Season’s Restaurant, located in the Seagrams Building on Park Avenue designed by Mies Van Der Rohe and Philip Johnson.  Rothko completed 40 paintings, three series in dark red and brown and even altered his horizontal format to vertical to go with the columns, walls, and windows in the restaurant.  After a trip to Europe and a visit to the restaurant, he abruptly changed his mind and returned the $35,000 (roughly two million dollars today) he’d been given for the paintings.   He kept them in storage until 1968, and they now hang in the Tate Modern in London, a museum in Tokyo, and the National Gallery of Art  in Washington D.C.

He never fully explained this decision, but many felt after visiting the restaurant, he found it pretentious and not the best place to view his meditative paintings.  He was quoted as saying they would end up in a space “where the richest bastards in New York will come and feed and show off” (told to a Harper’s Bazaar editor).
The play was written by John Logan, who also co-wrote The Gladiator, Rango, and most recently Hugo. After seeing the paintings at the Tate that were  intended for the Four Seasons, Logan was inspired to pen the play.  He was in London finishing up the screenplay for Sweeney Todd and found “they had a vibrancy, a severe and somber power to them”.
During the play, Rothko quotes Nietzche and  Freud   He talked about commercialism and how Dali and Picasso would sign menus to make money – even after he had accepted a $35,000 commission.
The play portrayed Rothko as a hard drinker, heavy smoker, and an intellectual with disdain for lesser minds, in short – an egomaniac.
The rectangles floating  – often using a palette of red and brown and black –  were meant to be seen in a contemplative environment, not on the walls of a restaurant where people went to see and be seen.
Rothko suffered from depression, and ended up committing suicide in 1970.   Surprisingly, his suicide coincided to the day the murals arrived at the Tate Modern in London.
I admit to downloading the play and re-reading it later.  I wondered how much of the dialogue came from Rothko’s own writings – because his spirit was there.  Some of the quotes I remembered and have read in reviews were:
“Selling a painting is like sending a blind child into a room of razor blades” – which showed he had a vulnerable side.
“One day the black will swallow the red.”
The murals are “a continuous narrative, each a new chapter”.
Painting is  “10% putting on paint, 90% waiting”.
“You cannot be an artist until you are civilized.  You cannot be civilized until you learn.”
In reading about Rothko’s paintings, the word repeated is “pulsates”.  As Rothko himself said:
“The fact that people break down and cry when confronted with my pictures shows that I can communicate those basic human emotions…the people who weep before my pictures are having the same religious experience I had when painting them.  And if you say you are moved only by their color relationships then you miss the point.”

What have you seen or read lately that inspired you to learn more about the subject or person? 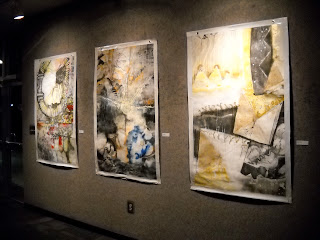 Sacred Spaces is the current exhibit at Georgia Perimeter College’s Clarkston Location in the lobby of the Fine Arts Building.   I really thought the work looked great in this environment.  To give some background to this work  – this is Lance’s artist statement for this:
“This series consists of ten 36″ x 56″ (approximately) pieces on paper.  The images and marks on these mixed media pieces are connected (through the artist’s mind) to spaces/places that have traditionally become associated with worship and/or are of pivotal importance to the world’s religions.  Only ten spaces are portrayed which implies that only some of the world’s religions and traditions are expressed.”
I think it works very well.   The paper is from a roll of watercolor paper and he taped the edges and put gromets in the top – a very effective way to present them.   The ten places are:
Friends Meeting House – Houston, Texas
Chartres Cathedral, Chartres France
Pyramids of Giza, Egypt
Dome of the Rock, Jerusalem
Pantheon, Rome
Acropolis, Athens
Stonehenge, Great Britain
Mecca, Saudi Arabia
Ziggurate of Ur, Iraq
St. Peters Basilica, Vatican City
I was really drawn to St. Peters Basilica, as well as the Dome of the Rock.   There is a reverence, as well as a rhythm about these pieces that are difficult to explain.  I felt the work was personal and reflected Lance’s spirituality.   And the fact that Lance is an architect makes it more interesting to see his interpretations of these places. 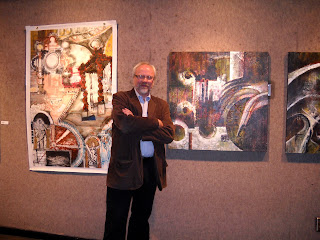 While these ten pieces make up the core of the show, it is interspersed with some of Lance’s favorite works.   Above you see him standing in front of his favorite piece in the show.
The show will be up through February 10th.   I encourage you to check it out.  AND, I hope Lance finds another places to display these pieces because they deserve to be seen.
Lance’s work can be seen at DK Gallery on the square of Marietta.