As I am reading around the United States (reading a book by an author from each state) I couldn’t have chosen a more appropriate book to read for Iowa than THE LIFE AND TIMES OF THE THUNDERBOLT KID by Bill Bryson. 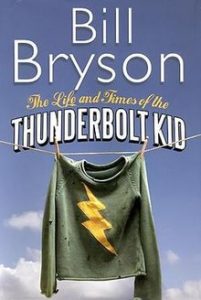 This book is not just entertaining, it is laugh out loud funny.  Bryson was born in the middle of the 20th century (1951) in the post war years. His father was a well known sports writer for THE DES MOINES REGISTER. As the same time, his mother was the home furnishings editor at the same paper a job, ironically it was a job so busy she rarely had time to practice domestic arts at home.  The title of the book is from an imaginary alter-ego Bryson invented for himself as a child, giving himself the ability to vaporize people with heat vision when he felt powerless while sincerely believing he was from another planet.

Told through the eyes of a child, there isn’t a shred of malice anywhere in the book. He reports on many of the events that were happening at the time, like the development of the atomic bomb (which seemed more entertainment than a threat), frozen foods and television.

As it moves into his junior high and high school years, he begins smoking, drinking and stealing, never getting caught. You see the moment he meets Stephen Katz (remember him in other Bryson books, most notably A WALK IN THE WOODS). Bryson ends the book with these lines, “What a wonderful word that would be, What a wonderful world it was. We won’t see its like again, I’m afraid.” But, at least he’s written this book and it allows us to visit this world from time to time.

SOME ODD AND PROBABLY SURPRISING FACTS ABOUT IOWA

The machine that slices bread was invented here – so this is where the first sliced bread was.

The Trampoline was invented here – along with the Eskimo Pie.

The house pictured in the painting AMERICAN GOTHIC is located here.

The day the music died happened at Clear Lake, Iowa.

25% of the state’s electricity is generated by wind.

Iowa is the only state that is bordered by two nagivable rivers – the Missouri and the Mississippi Rivers!

Next I’ll be traveling to Kansas and I’m reading two books by the same author. If you have a favorite author from any remaining state – I’m happy to take suggestions.

One thought on “FOR MY READING QUEST, JOIN ME ON A TRIP TO IOWA WITH BILL BRYSON”