I did end the year with a bang – topping 100+ books! Before you get all gushy and start congratulating me, I have decided to read LESS next year. Yes, read LESS. I am going to make an effort to not read prior to 8PM during the week, and only 30 minutes in the morning. I have decided to read a few classics that have eluded me over the years. However, here are the dozen books I read in December 2016.

THE HUNGRY TIDE by Amitav Ghosh – Currently I am in a reading challenge to read a book from each continent, and this was my choice for Asia. Set in the Sandarbans, which is located on the eastern coast of India and Bangladesh (see map below). I’d never heard of this part of the world, and I loved learning about it. Piya Roy, a  American marine biologist of Indian descent, and is in search of a rare species of river dolphin. She enlists the aid of an illiterate and proud local fisherman and a translator she met on the train. Reading this book is one of the reasons I love reading challenges, I wouldn’t have found this book otherwise and learned of a new world.

BIRD IN HAND by Christina Baker Kline – On the way home one rainy night, Alison hits a car that ran a stop sign and a death occurs. Everything changes in the blink of an eye. This is a story about four people, two marriages that are changing. It is a page turner.

RECKLESS by Susan Kiernan-Lewis (Mia Kazmaroff Mysteries) – I picked this up as it looked like a quick read set in my hometown of Atlanta. Mia has a paranormal gift and teams up with an ex-detective to solve a mystery. It was a quick read, but pretty much forgettable. Also she had some of the geography wrong for Atlanta – irritating, especially from someone that used to give historical tours of the city.

BASQUIAT – A QUICK KILLING IN ART by Phoebe Hoban – very compelling biography about the artist Basquiat, who died of a drug overdose at the age of 27. This follows his meteoric rise in the 80’s New York art scene and his ultimate burnout and drug consumption. It covers the graffiti art movement, the crazy world of art auction houses, his relationships with multiple women (including Madonna) and of course, his relationship with mentor Warhol. I liked it so much I continued my journey by watching the movie Basquiat, which is worth seeing if for none other than David Bowie’s portrayal of Andy Warhol (or should I say his channeling of Warhol).

ARTIFICE by Eric Bickernicks – this was a free download on Kindle, and since it was about art, why not? it was enjoyable, but a little silly and largely forgettable.

THINK AND GROW RICH by Napoleon Hill  – This was originally published during the depression, and by the time of the authors death in 1970, it had sold more than 20 million copies! It is the  product of two decades of research begun when Andrew Carnegie gave Hill he task of organizing a Philosophy of Personal Achievement. Armed with only an introductory letter from Carnegie, he interviewed over five hundred successful people including Henry Ford, Thomas Edison and others. This is the result of the research – and the 13 steps to success. It is a book to keep and refer back to.

A LESSON IN SECRETS – A MAISIE DOBBS NOVEL by Jacqueline Winspear – Maisie is working undercover in a university in Cambridge founded by the author of a pacifist children’s book which may have caused a mutiny during WWI. Of course, the author of this book is murdered almost as soon as Maisie arrives. This is a fun series, but I don’t feel this is the strongest book. 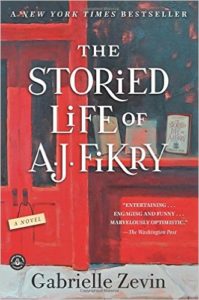 THE STORIED LIFE OF A.J. Fikry by Gabrielle Zevin – I found this on my bookshelf as I was doing my end of the year purge. I don’t know how I overlooked this little gem, after all it is about books and a bookstore! Set in the bookstore Island Books, A.J. is mourning the loss of his wife when his priceless copy of a Poe book has been stolen and a baby is left in the store. Quirky, but also uplifting, it is filled with interesting characters, critiques of classical books, and it is a wonderful book for those that love books and bookstores!

THE LIGHT BETWEEN OCEANS by M.L. Stedman – In reading around the world, this was my choice for Australia. This is an incredibly sad tale (soon to be a major picture by Steven Spielberg) about Tom Sherbourne returning to Australia after WWI where he takes the job as a lighthouse keeper on an island about half a day’s journey from the coast. He eventually brings a wife, Isabel, After a few years of miscarriages, they find a boat washed up on shore with a dead man and a crying baby. They raise the baby as their own, but learn several years later, someone has been looking for the man and the baby. Amoral dilemma for sure! 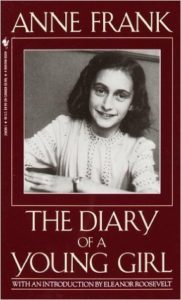 ANNE FRANK: THE DIARY OF A YOUNG GIRL by Anne Frank – need I say more? I should have reread it before now, and everybdy that read it in school should reread it as an adult. The introduction is written by Eleanor Roosevelt.

THAT OLD CAPE MAGIC by Richard Russo – This is the story of Jack and Joy, who have been married for 35 years. Through this time, they have both tolerated their in-laws and have now separated. Reunited at their only child’s wedding. Jack has the ashes of both his parents in the trunk, with his mother talking endlessly to him. Part of the book is quite humorous, but it is not the strongest book by the great Richard Russo.

THE PRINCE OF FIRE (Gabriel Allon Novel) by Daniel Silva – i love the premise of these books, world famous art restorer by day, Jewish assassin by night (kind of). This is the 4th book in the series, and like the others it is fast paced, action packed. It covers a lot of ground, going from Rome, to Venice, Cairo, London, Paris and Jerusalem. Along the way Silva gives a history lesson from 1910 to the present, on the struggles between the Palestinians and the Israelis. Great exciting way to end the year!

I have been giving thought to what I will read going into 2017 – more on that later. Any suggestions? I will continue reading around the world, and continue my journey with authors from each state in the United States.