For the last several years I have been creating art that is inspired by a particular song. Why? To bring awareness to dementia, because you NEVER EVER lose you musical memory. This was inspired by my mother’s dementia and noticing the effect music had on dementia patients. The reason this is happens (without getting all scientific) is because the place where music is stored in our brains is the last place affected by dementia. Music  is often referred to as “THE LAST MEMORY”.

Several months ago I declared a quest to create work that is inspired by a song beginning with every letter of the alphabet, documenting the journey as I go. (You can read it  HERE. )

The first song for my quest is AIN’T NO MOUNTAIN HIGH ENOUGH.  To get inspiration for the painting not only do I listen to several versions of the song and learn to play it on the piano, I also research the story behind the song.

I always “assumed” this song was about finding a great love. Did you? If you did, we were both WRONG!

The song was written by Nicolas Ashford and Valerie Simpson in 1966 hoping it would be their ticket to join Mo-Town.

In 1962, Nick Ashford moved to New York City after graduating high school to become a dancer. When this didn’t work out, he ended up homeless. Meanwhile, while still in high school, Valerie Simpson was singing in a choir in Harlem. One day Nick showed up there, basically looking for a hot meal. And, you know what happened next – right? Valerie persuaded him to join their group.  They eventually began collaborating, and in Valerie’s own words, “Nick was the perfect mouthpiece for my melodies, and my piano inspired his lyrics. It was an easy relationship.”

Nick had already written the lyrics for this song. He said the words came to him while walking the city, worried about whether he could stay in NYC. He noticed the buildings along the park looked like mountains, and these lyrics came to him:

“Ain’t no mountain high enough/Ain’t no valley low enough/Ain’t no river wide enough/to keep me from getting to you.” So, the “you” was not a love interest, it was SUCCESS.

As you can see, I put texture on each piece and while listening to several versions of the song, I handwrite the lyrics directly on the canvas. This is my way of really meditating on the piece. 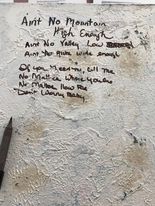 The next thing I do is to get the piano music and start playing. 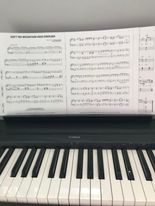 To create the mountains, used canvas I reclaimed from old paintings, which gave it the kind of texture usually found in nature. 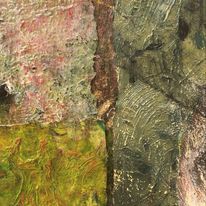 To add more texture, I played around a little with fire (I guess I was in that kind of mood that particular day). 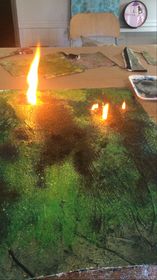 I love to experiment and try new things, but I always keep the spirit of the song in the forefront. While I cover up the lyrics, I always have them, along with the sheet music, close by.

Here is the resulting image. If you look closely, you can see the images of city buildings in the mist on the right. 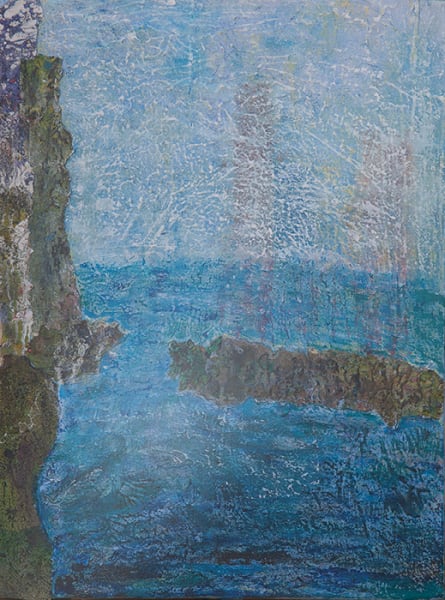 Here are more interesting facts about the song:

ONE FACT ABOUT DEMENTIA: Dementia is the sixth leading cause of death in the United States for older people. Some estimates rank as high as third in older people, behind only heart disease and cancer. AND THERE IS NO CURE.

What’s up next in my quest? Since I’ll be traveling to a song that begins with a “B”, I’m going to a BRIDGE OVER TROUBLED WATER.