D IS FOR SONIA DELAUNAY

Doing this research makes me want to learn more about Sonia Delaunay! She was the first living female artist to have a restrospective exhibition at the Louvre in 1964. She was given  the French Legion of Honor in 1975. Along with her husband, she is credited with cofounding the Orphism art movement (given the name by the poet Apollinaire) which came from Cubism but gave priority to color.  Are you interested yet?

She was born in the Ukraine, educated in St. Petersburg, went to art school in Germany at 18 and then moved to Paris to pursue her artistic calling.

While she was enrolled in the Academie de La Palette in Montparnasse, she spent most of her time in the museums and galleries and was influenced by Van Gogh, Gauguin, Matisse and others that were being shown at the time. During this time she met and married the German gay gallery owner Wilhelm Uhde. Not much is known about this union, it was likely a marriage of convenience. But, it did give Sonia exposure through his gallery.

It was through Uhde’s gallery she met Robert Delaunay. She divorced Uhde and married Delaunay. About Robert she said:

In Robert Delaunay I found a poet. A poet who wrote not with words but with colours.

They had a son in 1911, and the quilt she spontaneously made using geometry and color changed the direction of her art.

I had the idea of making for my son,  – – a blanket composed of bits of fabric like those I had seen in the houses of Russian peasants. When it was finished, the arrangement of the pieces of material seemed to me to evoke cubist conceptions and we then tried to apply the same process to other ojbects and paintings.

The Delaunay’s moved to Spain in 1914.  In 1917 they met Sergei Diaghlilev, (creator of the Ballets Russes) and Sonia designed the costumes for his ballets in Barcelona.

She began selling her designs for interior designs and for fashion.

The family returned to Paris permanently in 1921. Sonia Delaunay began making clothing for private clients and in 1923 created fifty fabric designs using geometrical shapes and bold colors. She even designed costumes for a few French films. 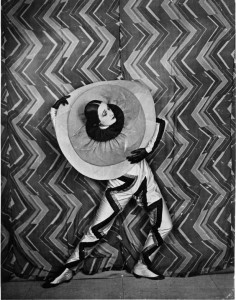 After Robert died in 1941, Sonia continued to work as a painting and designer.  At the age of 91 she designed textiles, jewelry and tableware for the French company Artcurial. Her autobiography was published in 1978. She died at the age of 94 in 1979, painting the day of her death!