Obviously, I got a little behind in my blogging, so I’m combining the past two months of readingtogether. In looking back at what I’ve read, I seem to be on a light-hearted spiritual quest.  Also, I started taking my QUEST of reading a book by an author from each state a little more seriously. I’ve got my books lined up until the state of Georgia (which is my home state). Here goes:

BREAKFAST WITH BUDDAH by Roland Merullo: This book follows Otto Ringling six days across the country to North Dakota, where he plans on selling his family home.  When his new age sister decides to give half of the farm to her guru, Volvo Rinpoche, he agrees to let the monk accompany him. Otto is a happily married food-book editor in New York, but he is as big a skeptic as they come. As the two  set off, Otto decides to show the monk America. Along the way, they visit the chocolate factory in Hershey, take in a game of bowling and go to a Cubs game at Wrigley field. While Buddha is in the title, the book is not about Buddhism, but about cynicism giving way to self discovery. I laughed and I was touched. I will definitely read the sequels, Lunch and Dinner with Buddha. 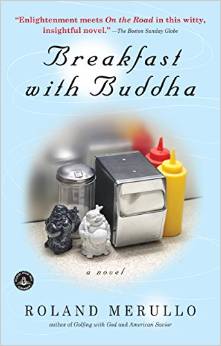 THE DALAI LAMA’S CAT by David Michie: The opening lines got my attention.

“I began to think that perhaps the time had come for me to write a book of my own—a book that would convey some of the wisdom I’ve learned sitting not at the feet of the Dalai Lama but even closer, on his lap. A book that would tell my own tale . . . how I was rescued from a fate too grisly to contemplate to become the constant companion of a man who is not only one of the world’s greatest spiritual leaders and a Nobel Peace Prize Laureate but also a dab hand with a can opener.”

The cat, that is called many different names in the book (most notably HHC)  narrates the book and recounts lessons he learns in the monastery in the Himalayas. David Michie has written many books on mindfulness and meditation, and this is a lighthearted look at the teachings of Buddha – i recommend it to anyone that wants to learn more about Buddhism, and if you are a cat lover, that is an added bonus. I will check out more books by David Michie. The discourse in the book between the Dalai Lama and a young girl that has been told by a doctor to eat meat really made me stop and think. I have been struggling with eating meat, settling on just fish and chicken. What the Dalai Lama said in the book made me totally rethink this – I haven’t started eating beef yet, but I might!

JOURNEY OF SELF, MY SIX MONTHS IN THE JAPANESE COUNTRYSIDE by Nate Golon: Are you seeing a trend here with the books I chose? This was a free download, but a charming surprise. After breaking up with a girlfriend, Nate sells everything and goes to Japan to teach English, finding himself in a small town in Southern Japan. Of course, he doesn’t know Japanese, he doesn’t know the customs, but even though he is the stranger in a strange land, he finds friendship, adventure and eventually himself.  While it isn’t the best written book I’ve read, it was still interesting.

GIRL ON THE TRAIN, A NOVEL by Paula Hawkins: This seems to be THE book of the summer. If you liked Gone Girl, you will like this book. It follows three women, “Jess” who has disappeared, Rachel who watched Jess  in her house from the train, and a third, Megan, who is married to Rachel’s ex-husband and lives a couple of doors down from the disappeared girl. There are twists and turns and some surprises along the way.  But, I was totally unsympathetic to these characters, they are selfish, shallow and Rachel’s drinking gets in the way of her life. However, it is a page turner.

OCCUPANT by Edward Albee: Based on the life of artist Louise Nevelson, it is the one act play that tells the story of the artist being interviewed by an unnamed reporter after her death. Edward Albee and Louise Nevelson were friends.  I read this while researching a blog I wrote about the artist that you can read HERE. I’d love to see the play! (Edward Albee wrote Who’s Afraid of Virginia Woolf).

TRAVELS WITH CHARLEY, IN SEARCH OF AMERICA by John Steinbeck:  This is part of my quest to read a book by an author from each state – this is my California selection. There will be a separate blog dedicated to this selection. I will say I enjoyed it so much I have Cannery Row sitting here to read soon. 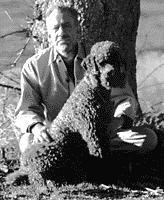 That’s it for the past two months – I decided to leave off books I downloaded and read in an hour that I don’t really remember. Currently I am reading my selection for the state of Colorado.

I plan on reading a classic piece of literature every couple of months, concentrate on my quest a little more and read more about art.  What about you?

6 thoughts on “TWO MONTHS OF READING – MAY AND JUNE”