Obviously, I got sidetracked and didn’t get my October reading blog posted. I’m not going to get into a lot of detail – as there are almost 20 of them! But – here they go!

BOYHOOD: Scenes from Provincial Life by J.M. Coetzee – I was challenged to read a book from each continent, so I started with this book from Africa.  The first of a trilogy about growing up in South Africa at the time of apartheid. Strong book. Coetzee was the 2003 recipient of the Nobel Prize for Literature. 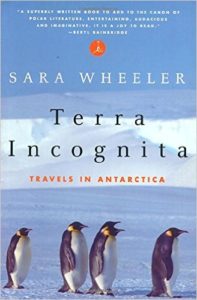 TERRA INCOGNITA: TRAVELS IN ANTARTICA by Sara Wheeler – As part of the reading challenge, I left Africa and went to Antartica. I realized how little I knew about Antartica!! A women spends seven months in Antartica as part of an artist program. I was so intrigued, I watched a documentary on Shackleton as a result of this. (This is one of two books I read in the past two months that deal with Antartica!)

CAN WE TALK ABOUT SOMETHING MORE PLEASANT: A MEMOIR by Roz Chast – this is the story of the last years of Roz’ parents life, something many of us can identify with these days. It is a graphic novel – easy to read and very moving, funny and poignant.

HOW TO READ LITERATURE LIKE A PROFESSOR by Thomas C. Foster – I will give more thought to what I’m reading in the future!

ALL THE LIGHT WE CANNOT SEE by Anthony Doerr – While it is at times brutal in its depiction of WWII, it is still one of the most magical books I’ve read. It may have been my favorite book of 2016.

THE LITTLE PARIS BOOKSHOP: A Novel by Nina George– I’m a sucker for books about books, especially when it is set in a bookshop that sails down The Seine!  Another magical book – and a contender for my favorite book of 2016!

THE BUNGALOW MYSTERY by Carolyn Keene – This is the 3rd Nancy Drew book, which I found at my mothers house. I had written on the front page “This is my first mystery book. Given to me by Mrs. Jones on 12/22/1966”. Well, I haven’t stopped reading mysteries after 50 years!

THE OPPOSITE OF EVERYONE by Joshilyn Jackson – This book is by a local author and I wanted to love it so much! It was okay – about an cryptic message received from an estrange mother to her daughter, now a high stakes lawyer in Atlanta. Enter a half brother she didn’t know of, and they search for the half sister that was a surprise too. Throw in a little Hindu and mix it with the South. 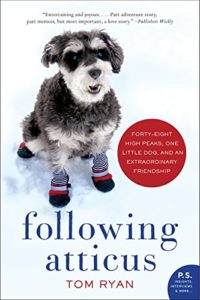 FOLLOWING ATTICUS – FORTY EIGHT HIGH PEAKS, ONE LITTLE DOG AND AN EXTRAORDINARY FRIENDSHIP by Tom Ryan – I picked this up a book festival. Who could resist that little dog? And, I have a dog named Atticus. I admit, I looked at the ending to make sure it didn’t end at the death of the dog! I learned about the 48 mountains in New Hampshire that are over 4,000 feet tall, as Tom and Atticus attempt to climb them all – not once, but twice – over the winter!

THE DESCENDANTS by Kaui Hart Hemmings – this was my Hawaii choice as part of my quest to read a book by an author from each state. I will blog about this separately, but if you loved the movie, you will love this book!

START SOMETHING THAT MATTERS by Blake Mycoskie – This is written by the founder of Tom’s Shoes – something I have been buying forever! There are a lot of good points about following your passion. Plus – I didn’t know he was a contestant on The Amazing Race!

MY FAMILY AND OTHER ANIMALS by Gerald Durrell – I am hooked on the BBC show, The Durrells of Corfu, which is based on this and the first book of The Corfu Trilogy. I loved this book and will read all three! Based on the writing of the youngest son, it is the adventures of a family consisting of a widow, three sons and a daughter that move to Greece.

WHERE’D YOU GO, BERNADETTE: A NOVEL by Maria Semple – Interesting format, with part of the book written as emails, letters and even F.B.I. documents. Bernadette is an agoraphobic  and the mom of Bee, who has aced her report card. Bee wants her reward to be a trip to Antartica. As they are planning the trip, Bernadette disappears. Humorous and not overly sentimental. (The second book that deals with Antartica!)

EMMA A MODERN RETELLING by Alexander McCall Smith – This is part of The Austin Project, where six modern day authors retold different Jane Austen books in modern times. It was an enjoyable read, but I really don’t like Emma very much.

THE VISION BOARD by Joyce Schwarz

Right now I’m reading a book set off the Eastern Coast of India in a place I’d never heard of! What are you reading?