This is the 16th installment of “Women in Art” series

Born Alice Prin, she eventually became known as Kiki De Montparnasse. In the 1920’s, Montparnasse, located on the left bank of the river Seine,  became the meeting place for the artistic world – with artists coming from all over the world. Gertrude Stein ran  a salon that was attended by the likes of Picasso, Matisse, Hemingway. Sylvia Beach had Shakespeare and Company, almost going bankrupt publishing Ulysses for James Joyce.  Montparnasse created some great colorful characters, with Kiki in the middle of it all. She would appear at Le Jockey Bar and sing bawdy funny songs, climb up on the tables and lift her skirts to dance (not bothering with underwear). But, she was more than an entertainer, she was a friend to many, a model to some and a muse to others – most notably to Man Ray.

She was raised in total poverty by her grandmother. At age twelve, she was sent to Paris to live with her mother, working in shops and bakeries (She was fired from a bakery for darkening her eyebrows with matchsticks!) By the age of fourteen she was posing nude for sculptors – causing her mother to kick her into the streets.

It was Chaim Soutine that named her Kiki when she was posing for him.

Her companion for six years (or eight years depending on where you look) was the photographer Man Ray, and his most iconic image was a photograph of her, which was reproduced on the cover of the graphic novel about her life. She also starred in several surrealistic films by Man Ray (see link at the end of the post for a tribute to her)

She was a painter in her own right, having a sold-out exhibition of her work in 1927 (however, none of these images were available). It is reported her drawings and paintings included self-portraits, dream landscapes and animals apparently painted in an Impressionistic style (which I find interesting as many of her friends were Surrealists).

In 1929 her memoirs were published (at age 28) with an introduction by Hemingway who wrote:

“about as close as people get nowadays to being a Queen, but that, of course, is very different from being a lady.”

For a few years in the 1930’s she owned a Montparnasse cabaret known at “Chez Kiki”.

“All I need is an onion, a bit of bread, and a bottle of red wine, and I will always find somebody to offer me that.”

Her health began to decline in the 1930’s and she also began financing medical care for her mother.  She left Paris in 1940 to avoid the German occupation living mostly in the South of France.

Kik died in 1953 after collapsing outside her flat. She was only 52, suffering from complications from alcoholism and drug dependence.  Her tomb says:

The painter Tsuguharu Foujita said that with the death of Kiki, the glorious days of Montparnassee were buried forever. 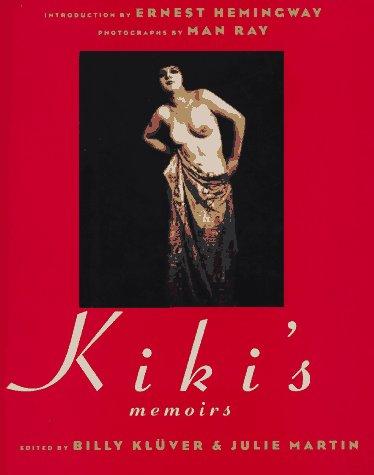 This book was apparently banned in the US until the 1970’s. In her honor, a daylily was named Kiki de Montparnasse. There is also a high end sex store that bears her name.

Here is a video of a tribute to Kiki with clips of some of the surrealistic films made by Man Ray.


If you are interested in learning more about Kiki, I highly recommend the graphic novel about her simply titled Kiki de Montparnasse.  I enjoyed researching this, I would like to read more about that glorious time in Paris, so you have recommendations, let me know. I found Kiki was more than just being famous for being famous, there was more to her than that! She lived gloriously for a time, with a tragic ending.